While OnePlus is preparing to re-release the Realme GT Neo 3 twice under the names OnePlus 10R and OnePlus Ace, Realme itself continues to release smartphones and this time the novelty has joined the ranks of the V series. The Realme V23 premiered in China today.

Realme V23 released: a lot of memory, a capacious battery and Android 12

The smartphone has a fingerprint scanner at the end, a 3.5 mm headphone jack, 33 W fast charging and a dual rear camera, where a 2 MP sensor was given to the main sensor in a pair of 48 MP. The Realme V23 is run by the Android 12 operating system with the Realme UI 3 shell. 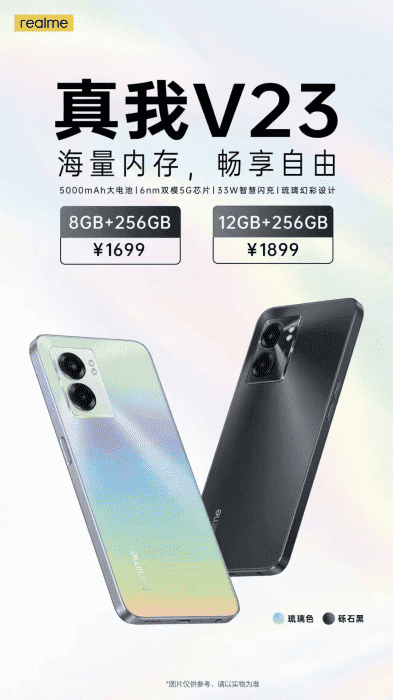 Realme has released a teaser announcing that the presentation of the Q5 and Q5 Pro smartphones running the Android 12 operating system with the proprietary Realme UI 3.1 user interface will take place on April 20.

The base version of the Realme Q5 will reportedly feature a 6.58-inch Full HD+ display with a resolution of 2408×1080 pixels, an unnamed octa-core processor, 4GB or 6GB of RAM, and a 128GB flash drive. There is an 8-megapixel camera on the front, and a dual camera with 13 and 2 megapixels sensors on the back.

The more powerful Realme Q5 Pro smartphone will carry a Snapdragon 870 processor; 8 or 12 GB of RAM and a 128 or 256 GB drive. The screen size will be 6.62 inches diagonally, the resolution is Full HD + (2400 × 1080 pixels); the refresh rate is 120 Hz. The front camera will be able to form 16-megapixel images. For the rear camera, a three-component configuration is provided with sensors for 64, 8 and 2 megapixels.

Both new items will have a fingerprint scanner and a 5000 mAh battery. However, we will for sure discover more details about these upcoming Realme smartphones in the next few days.

Previous Why do flagship chips for Android devices overheat? Here are the reasons

Next Switching from iOS to Android just got easier