There is something about the Google Pixel 6 series that makes its issues always make the headlines. Make no mistake about this, all smartphones whether Android or iOS has their fair share of bugs. These bugs are also pretty common and smartphone brands have to work on them week after week. However, when it comes to Google Pixel smartphones, they usually make the headlines. Recently, according to some users’ feedback on Reddit, there is a bug in the Google Pixel 6 Pro. The Reddit post claims that these smartphones automatically reject calls without notifying users. 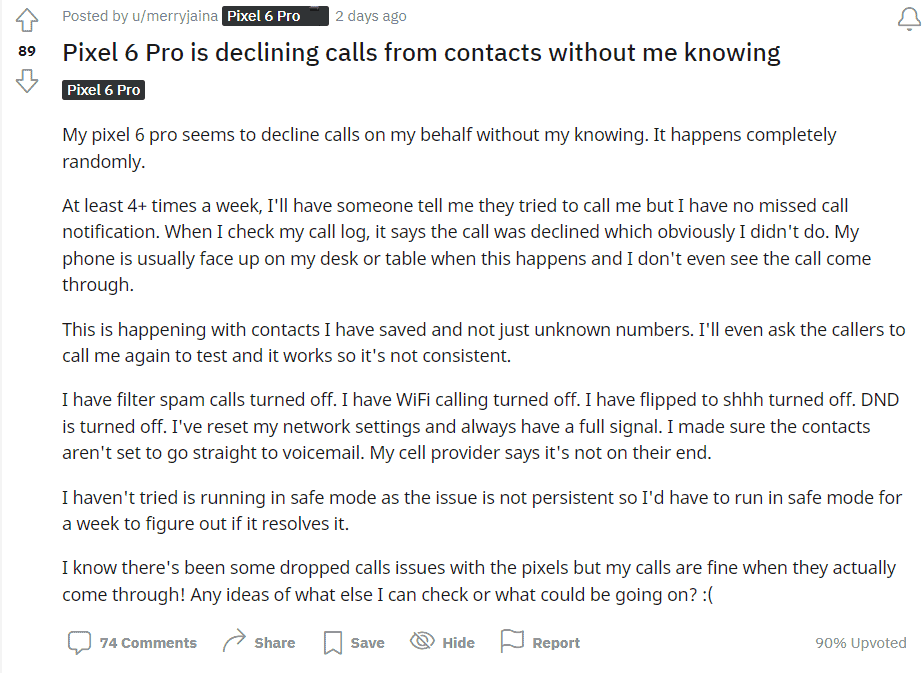 According to the user description, when the call is rejected, the caller will receive a notification that the call is not connected. However, the Google Pixel 6 Pro will not notify the user, but will show that someone is calling in the call log. At the same time, after testing, this rejection does not have any fixed time period or rejection number but is completely random.

At present, Google has not officially responded to this issue. Nevertheless, judging from the current amount of feedback, Google may fix the bug in subsequent updates.

As a flagship product, the Google Pixel 6 Pro series costs no less than $700. For a flagship device, this series has a whole lot of problems. Since its release, feedback about its vicious system bugs has hardly stopped. Before this phone rejection bug, the Pixel 6 series had experienced many serious problems, such as Wi-Fi function failure, photo album app flashback, fingerprint recognition failure, inability to call, automatic rotation failure, shutdown screen flashing, etc. However, it will interest you to note that some users claims they have not experienced any of these issues with the Google Pixel 6 series.

Previous How to transfer WhatsApp to a new iPhone or Android smartphone?