The fight between iOS and Android keeps going on among the cycle of fans of these platforms. Android has quickly evolved from a lackluster experience to the top mobile OS in the industry. After multiple iterations, Android gained ground and became the dominating operating system in the industry. That wasn’t a much hard task, after all, iOS is its biggest competitor and is available on just a few devices from Apple. Meanwhile, Android is available on a multitude of devices from all the smartphone brands that aren’t Apple. A few years ago, we had Windows Phone, but the OS became a big failure for Microsoft. There are still a few select Operating systems trying their luck as HarmonyOS and SailfishOS, but Android is still the king. Despite this, new research suggests that iOS is gaining popularity.

According to recent research from StockApps, Apple’s iOS has been gaining ground for the last four years and has acquired a good portion of Android’s global OS market share. Despite this, Google still dominates with its mobile operating system. Back in 2018, Android had a 77.32 percent market share. It is estimated that about 69.74 percent of all devices in the world run Android. That represents a drop of around 8 percent in just four years. In contrast, iOS has grown from 19.4 percent to 25.49 percent throughout the same period. 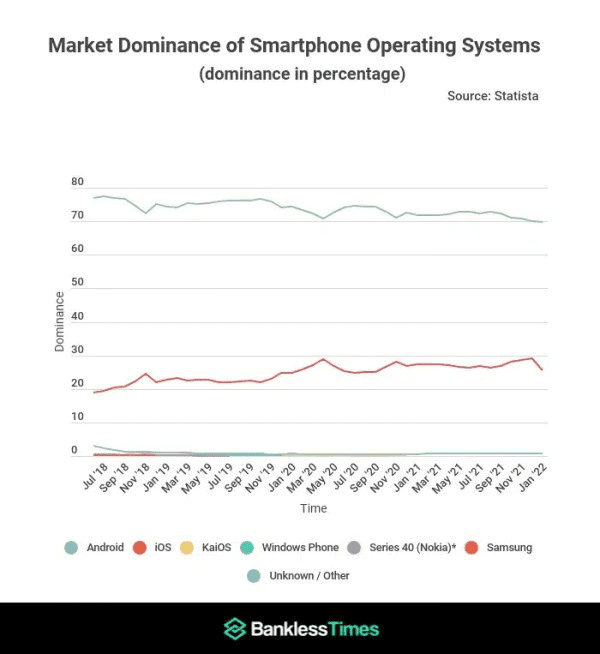 Apple’s bigger smartphone offer is one of the reasons

There are possible reasons for this increase, but the most obvious one is the increased offer of iDevices. Apple has been launching four iPhones every year for a while now. Previously, the company launched only one device, and then expanded it to two devices, three, and then four. The tendency of four devices every year will continue in the next years, and the company also updates its iPhone SE family in the meantime. This, for example, we’ll have five iPhones launched. The iPhone SE also is a cheaper option, which gives more customers the possibility to join Apple’s ecosystem.

Despite the growth, is almost impossible for Apple to overcome Android’s popularity. Android can be found in a myriad of devices from smartphones to tablets. In the future, the OS may also find its way to the PC as Google has been working to deliver advanced multitasking. The price is also another fact that helps Android. There are devices from $100 to $2000 on the Android bandwagon. So anyone can get an Android smartphone.

Apple has been trying to ease the process of switching from Android to iOS in recent years. And it’s now easier than before.

Next Samsung wants to take part in Apple M2 manufacturing