Recently, IC Insights, a world-renowned semiconductor data analysis organization, updated its second-quarter report. The report analyzes the market shares of major semiconductor suppliers, excluding pure-play foundries. Although there is a small double-counting effect on IDM foundry revenue, it is not enough to significantly change the overall conclusion. In 2021, the top 50 semiconductor suppliers, excluding pure-play foundries, will account for 89% of the total global $614.6 billion semiconductor market, an increase of 8 percentage points from the 81% share of the top 50 companies in 2010. The top 5, top 10 and top 25 companies will increase their share of the global semiconductor market in 2021 by 8, 9 and 11 percentage points, respectively, compared to 2010. 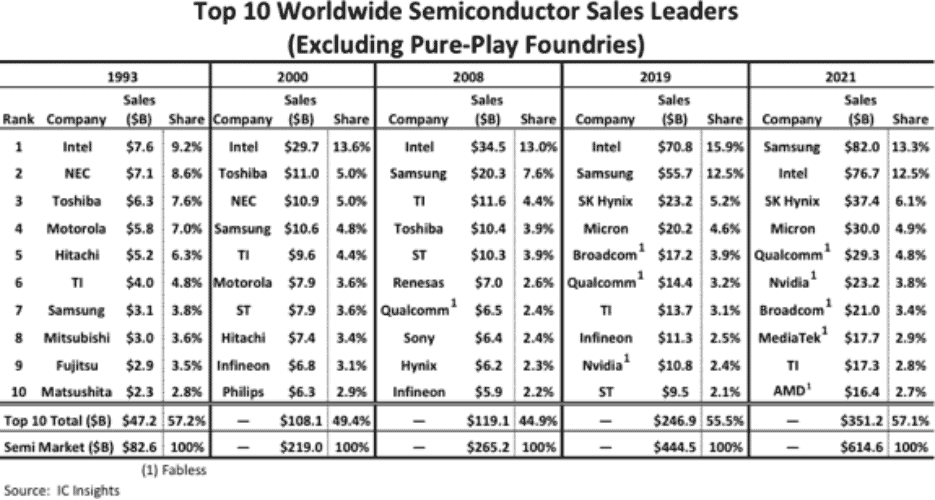 Mergers could increase the share of top suppliers – IC Insights

With more mergers and acquisitions expected in the next few years, IC Insights believes that mergers could increase the share of top suppliers to even higher levels.

In addition to foundries, there are two new entrants to the top 10 in 2021 – Taiwan’s fabless MediaTek and US-based fabless, AMD. The two companies replaced Apple and Infineon in the top 10 in last year’s ranking. MediaTek’s sales rose a staggering 61%, moving the company up three positions (from No. 11 to No. 8), while AMD’s sales rose 68% in 2021, from No. 14 to 10th place.

“As the global economy bounced back in 2021, shortages appeared throughout the semiconductor supply chain, particularly in the automotive industry,” … “The resulting combination of strong demand, as well as logistics and raw material price increases, drove semiconductors’ average selling price higher (ASP), contributing to overall revenue growth in 2021.”

“The 5G smartphone market also helped drive semiconductor revenue, with unit production more than doubling to reach 555 million in 2021, compared to 250 million in 2020. U.S. sanctions imposed on Huawei resulted in other Chinese smartphone OEMs gaining share and fueling growth for 5G chipset vendors such as Qualcomm, MediaTek and Skyworks. Meanwhile, HiSilicon, Huawei’s chip subsidiary, saw revenue decline from $8.2 billion in 2020 to around $1 billion in 2021.”

For modern electronics to run efficiently, semiconductors are very crucial elements. They make u an important and integral part of many electronic products including smartphones, tablets, PCs, radios and a lot more. Basically, all modern devices are dependent on semiconductors. Due to the high dependence on semiconductors, the market is very extensive and highly competitive. Some of the biggest names in the global semiconductor industry include Samsung, Intel, Qualcomm, Texas Instruments (TI), Toshiba, SK Hynix and more.

South Korean manufacturing giant, Samsung toppled Intel in 2021 to become the number one brand in the semiconductor market with a 13% market share. In terms of sales revenue, Samsung has consistently ranked within the top two for some time. According to Statista, the global semiconductor sales revenues for 2021 hit $583.48 billion.

Micron is another American semiconductor company with its headquarters in Boise, Idaho. The company produces computer memory and computer data storage. Of course, this includes flash memory, USB flash drives and dynamic random-access memory. According to the latest semiconductor global ranking, this company has a 4.9% market share. This is quite a distance from third place, SK Hynix.

Qualcomm is another American semiconductor company that produces a lot of flagship processors for Android smartphones. However, the semiconductor market goes way beyond producing smartphone chips. The company comes fifth with a 4.8% market share.

Other companies that make up the top 10 list include

As a whole, American semiconductor companies account for around 50% of the global market. This is a trend that should not continue. A single country should not control half of any market in the world.