Despite a decline in India smartphone shipments, OnePlus, and Realme has emerged as the fastest-growing smartphone brands in the country. A report by Counterpoint Research sheds light on Indian smartphone shipments for Q1 2022. Aside from this, the report divulges the market share of various smartphone brands. To recall, India witnessed the third COVID-19 wave in January this year. However, the unprecedented challenge did not cripple the unit sales in most of the brands. In other words, the Indian smartphone market remained stable amid the still-raging pandemic.

However, the worldwide component shortages triggered a 1 percent decline YoY (year-on-year) in the January-March quarter of Fiscal Year 2022. Regrettably, the Chinese government has imposed a lockdown since January, causing a major fall-off in smartphone shipments in the country. Notably, Xiaomi tops the list of smartphone unit sales in India with a whopping 23 percent market share. Likewise, Realme and OnePlus surpassed other brands as far as sales gains are concerned. This spectacular performance can be attributed to the debut of the OnePlus Nord CE 2 and OnePlus 9RT smartphones.

Taking the number 1 spot on the list, Xiaomi sold more smartphones than any other brand in India. This is particularly impressive given that it achieved these numbers despite component shortages. Further, these major sales are a result of Xiaomi launching several 5G handsets and revamping the Xiaomi Note series. Interestingly, these figures weren’t in Xiaomi’s favor last year, when the company saw a significant 13 percent loss in year-on-year growth. In the meantime, Samsung continues to stay on top of the list of the 5G smartphones sold in India. The South Korean tech firm was able to leave other leading brands behind due to the arrival of its flagship Galaxy S22 series. 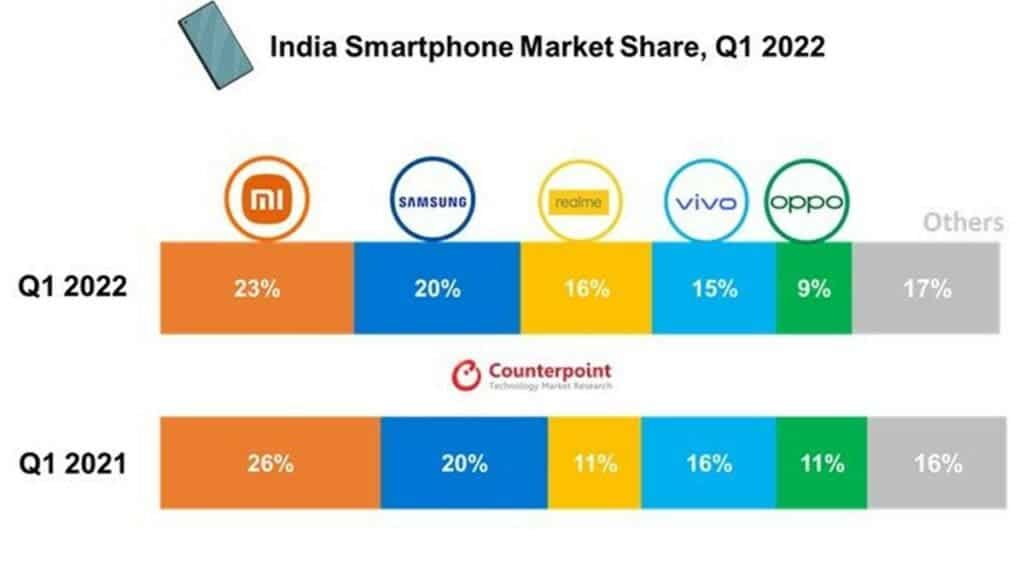 Moreover, multiple A-series and M-series smartphones played a vital role in ensuring that Samsung remained India’s top-selling 5G smartphone brand. This year’s offerings from Samsung wisely targetted each price segment including budget to premium flagship segment. However, Samsung saw a 1 percent decline in YoY growth, just like Xiaomi. OnePlus was India’s fastest growing brand with a year-on-year growth of 347 percent in Q1 2022. Moreover, more units of the OnePlus Nord CE 2 were sold in the country than any other 5G-ready smartphone in the first quarter of this year.

How Did The Other Brands Perform In the Last Quarter?

Realme surpassed both Vivo and Oppo as one of the fastest-growing brands, with a 40 percent increase as compared to last year. Realme adopted a smart strategy that involved targetting a wider audience but launching fewer phones in various segments. Moreover, some of the new Realme phones pack a Unisoc SoC, as part of the two tech giant’s collaboration. Oppo witnessed an 18 percent, and Vivo saw an 8 percent decline YoY. Notably, a large portion of sales for these brands come from offline markets. However, the company could not meet the sales goal in Q1 2022 due to the Omicron wave in India. 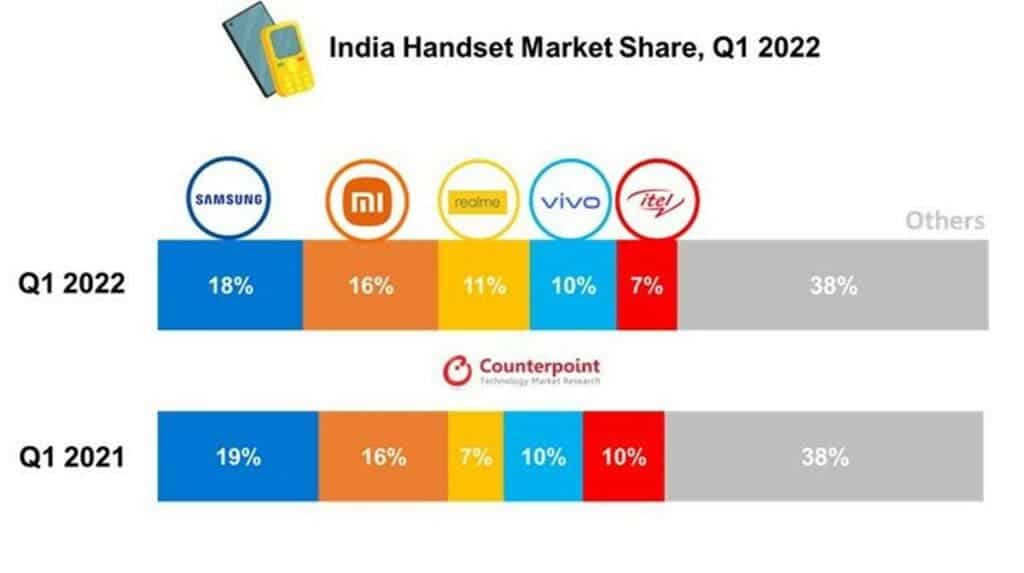 Apple remained the top-selling brand in the premium segment, with a 5 percent YoY growth in Q1 2022. This is primarily due to the new offers and discounts on the iPhone 12 series and iPhone 13 series smartphones. The Transsion Group-backed TECNO, Infinix, and Itel acquired a decent 11 percent of the smartphone market in India.

Previous Samsung Electronics pay its graduate employees over $40,000 per annum

Next Oppo Reno8 India Launch Set For June, Everything We Know So Far