While we await the official arrival of the MIUI 12 system, Xiaomi, is already letting us in on what to expect from its latest software version. Xiaomi MIUI 12 will be officially unveiled on April 27 and it will be with the Xiaomi Mi 10 Lite 5G. Recently, Xiaomi has been releasing some features of the new system. Today, MIUI official Weibo handle showed us some improvements to the note app.

According to the GIF images, the MIUI 12 notes and the to-do list is completely upgraded. The To-do now supports the creation of lists, making it more intuitive. In addition, users can simply click on Enter in the edit box to quickly create a list. This feature also supports the continuous addition of to-do items. 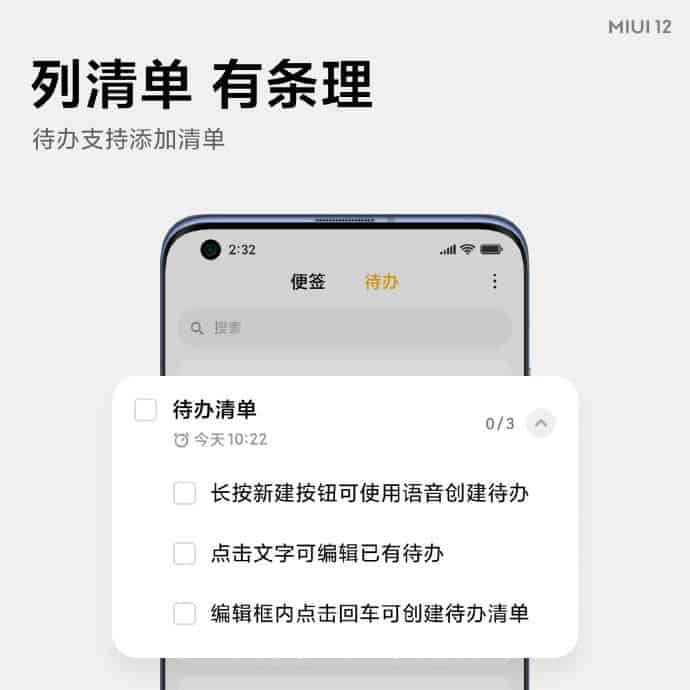 In addition, to-do quick entry synchronization supports list creation. Simply open the app and select “to-do” and open “to-do quick entry” in the “Settings” in the upper right corner. Slide the left-hand shortcut entry on the screen at any time to view and manage to-do items. Furthermore, the to-do list supports custom titles.

Xiaomi believes that the upgrades in this app will make it more relevant to Mi fans. It makes organization easier. Learning, task grouping, project management classification, travel sorting, and even creating your own management list becomes easy.

According to the company, this is not the entire feature in the MIUI 12 note app. Nevertheless, we will get to know about the rest on the launch day.

Previous Microsoft Surface Earbuds headphones will arrive on May 6