Analytical agency StatCounter found out which browser was used by the majority of people in the world in April this year. And we will talk about both desktop solutions and versions for mobile devices.

The original Microsoft Edge browser, built on its own EdgeHTML engine and released in 2015, was not popular due to various compatibility issues and not very fast performance. Later, Microsoft switched the browser to the Chromium engine; which made the application more popular and compatible with most Chrome extensions.

About two years have passed since the transition of Edge to Chromium. Obviously, this move by Microsoft was correct; since the desktop version of the browser took over 10% of the market in April. Edge’s global adoption rate was 10.07% in April, according to StatCounter.

Of course, this is still significantly less than Google Chrome‘s 66.64% share. However, the Microsoft browser managed to rise to the second line of popularity; overtaking Apple Safari, which was in the third position in the rating with a share of 9.61%. The top five also includes Mozilla Firefox browsers with a 7.86% share and Opera with a 2.43% share. 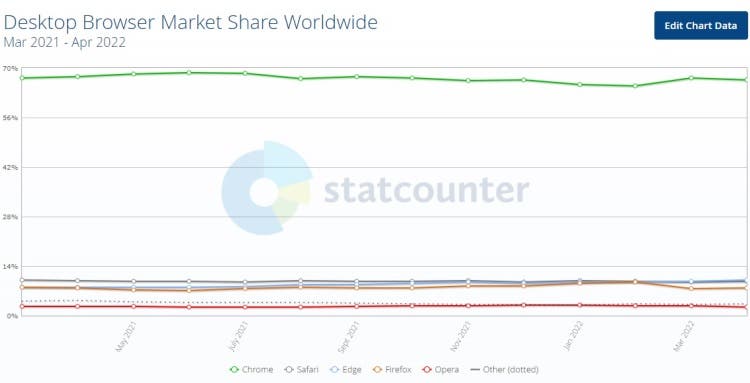 The update 100.0.4896.127 for Windows, macOS and Linux resolves a serious zero-day vulnerability CVE-2022-1364 that is actively in exploitation by attackers.

CVE-2022-1364 is a vulnerability in the Chrome V8 JavaScript engine that cybercriminals can use to execute arbitrary code.

The vulnerability was the discovery of Clement Lesin of the Google Threat Intelligence Team. The company notes that details will be available after the reception of the fix by most users.

Google Chrome 100.0.4896.127 for Windows, macOS and Linux fixes these issues. So, if the browser has not yet been automatically updated, the update can be installed manually by simply going to the Chrome menu > Help > About Google Chrome.

Three letters are enough to crash Safari browser on iPhone