The AdDuplex platform continues to monitor the distribution rate of different versions of Windows by regularly publishing reports based on the data collected. This time, the resource published the results of a study for April, which show that Windows 11 is spreading extremely slowly.

Several months have passed since the launch of Windows 11 last fall, but users are in no hurry to update their computers. This is due to the fact that support for Windows 10 will continue for several more years; and also because not every device meets the minimum system requirements for installing Windows 11. Users are in no hurry to switch to a new version of the Microsoft operating platform; according to AdDuplex statistics.

According to the platform, in April 2022, the share of Windows 11 among all PCs with Windows increased to 19.7%, while it was 19.4% a month earlier. The most popular version of the OS continues to be Windows 10 21H2, which is in use on 35% of devices. The share of previously released Windows 10 21H1 in April was 26.4%. The distribution of earlier versions of the OS is gradually reduced as their support period expires.

Typically, AdDuplex statistics are based on data collected from approximately 5,000 Microsoft Store applications that use the AdDuplex SDK 2.0. Data collection took place from tens of thousands of computers. Although this sample may not be large enough, it does give an idea of ​​the speed of distribution of different versions of Windows. 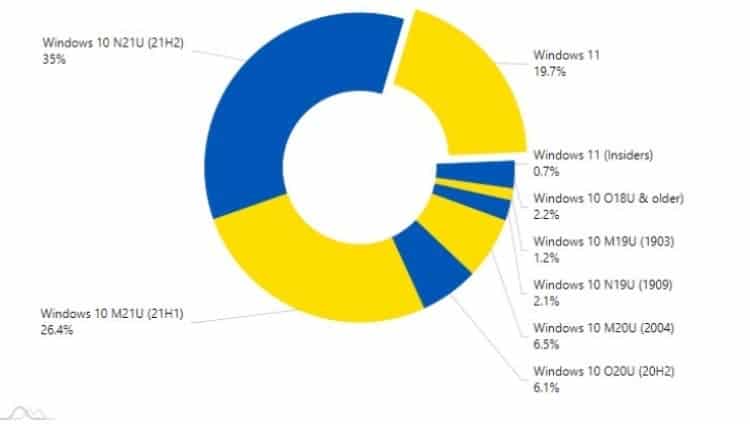 Microsoft has fixed a recently discovered bug in the Windows 11 operating system; that caused the screen to flicker in Safe Mode without network driver support. In a number of cases, it also disrupted the performance of some services; such as File Explorer or the Start menu. The issue is reportedly affecting Windows 11 (21H2) devices that have the optional cumulative notification KB5012643 installed.

“Devices experiencing this issue may log a system error in the Windows event log with the source ‘Winlogon’ and the following description. The shell exited unexpectedly and explorer.exe was restarted,” Microsoft said in a statement.

According to the source, Microsoft fixed the problem with the Known Issue Rollback (KIR) tool; which makes it possible to remotely disable problematic non-security fixes delivered via Windows Update. The patch is to be automatically effective for all consumer and unmanaged business devices within 24 hours.

You can speed up this process by rebooting the device. However, if you want to distribute this patch to enterprise-managed devices; then network administrators need to install and configure the KIR Group Policy accordingly.