Chinese manufacturer, ZTE, is getting set to unveil its latest smartphone in the Axon series. Recall that the ZTE Axon 20 is the first-ever smartphone to come with an under-display camera. Although the camera performance is not the best but it gives this device a full-screen appearance. Subsequently, the Axon 30 series improved on the under-screen front camera technology. Now, we have reports that the ZTE Axon 40 series will officially hit the market on May 9. Furthermore, we also have the first real image of the ZTE Axon 40 Ultra, the top flagship of the series. 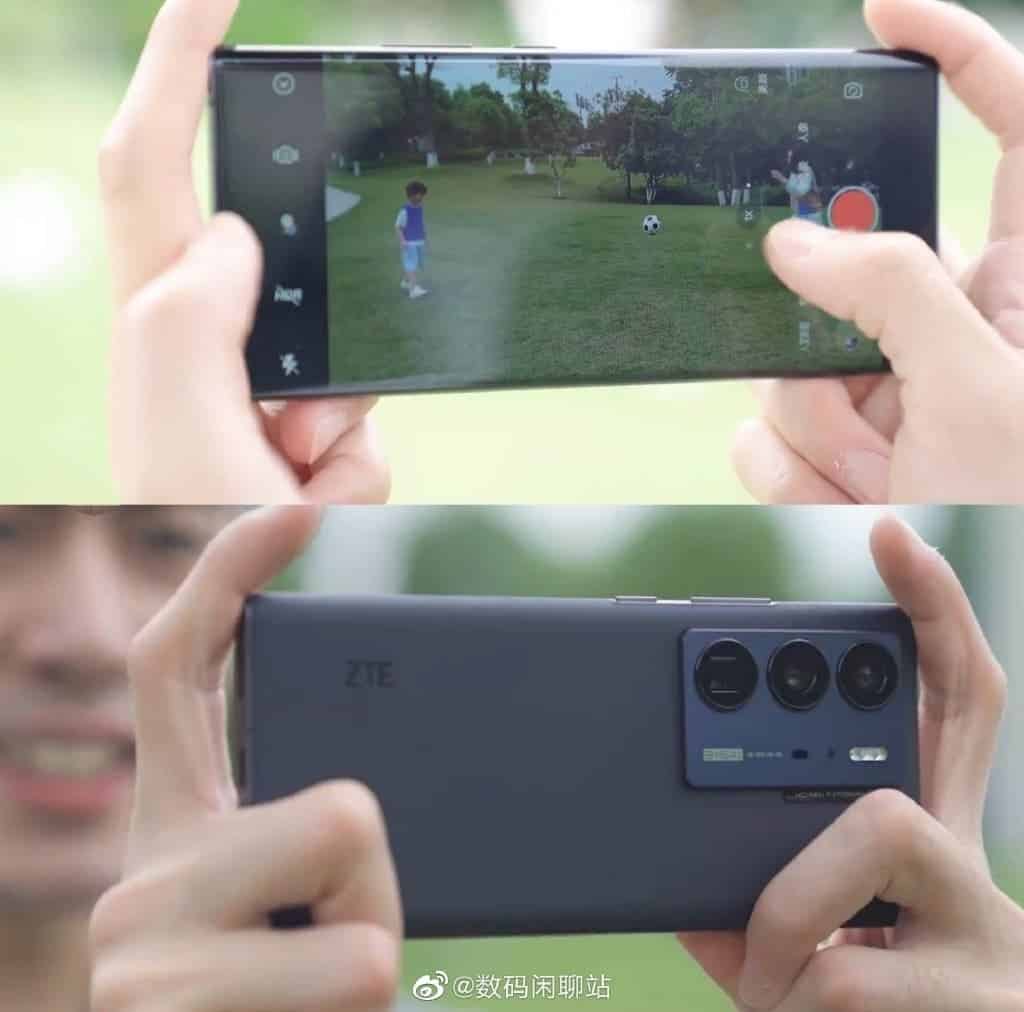 Of course, the feature of attraction of this device is naturally the new-generation under-screen front-facing camera. The hands-on image reveals both the front and rear of this smartphone.

In terms of the front screen, since the camera interface is exposed, it is impossible to confirm the effect of the under-screen front camera. However, we can clearly see the hyperboloid design of the smartphone. The curvature on both sides is relatively large, and the display effect / visual is pretty good.

As for the back design, the black version of the ZTE Axon 40 Ultra reveals that this device will use AG frosted glass. It appears pretty smooth to hold and we just hope it is not too smooth. Overall, the rear design is very simple. 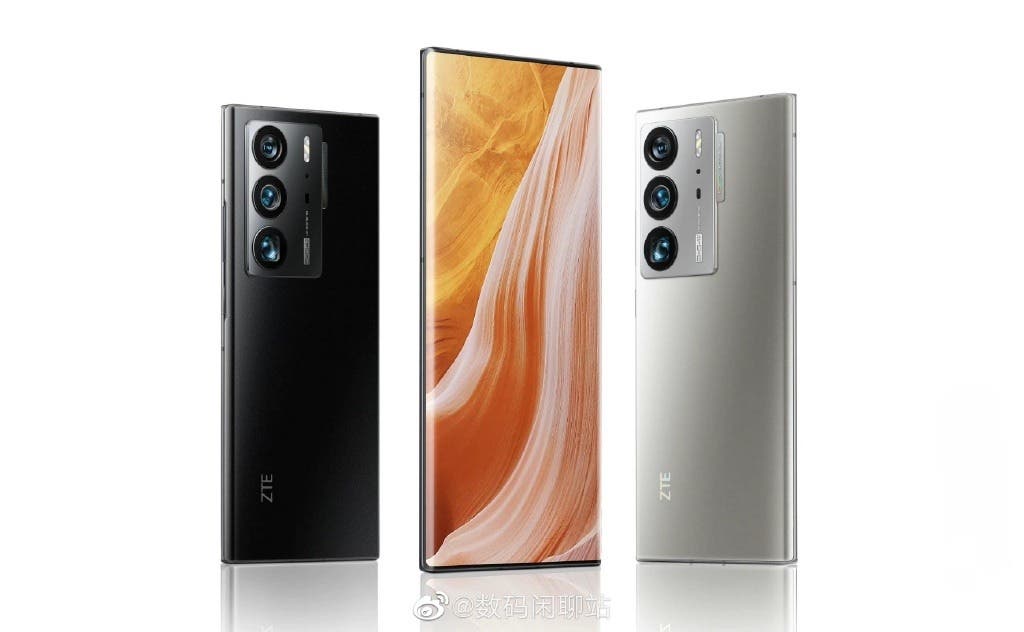 The rear camera part is very conspicuous with the square module hosting the triple camera. Underneath the camera module, “ZTE” is simply written in black. The three cameras are consistent in size. However, the bottom lens with a square sensor is a periscope telephoto lens.

ZTE Axon 40 Ultra – the most perfect full screen in history

Today, Ni Fei, President of ZTE’s Terminal Business Unit, said that ZTE Axon 40 Ultra is the ultimate form of candy bar flagship. It will be a cross-generational product, and it is the painstaking work of ZTE in the past few years.

According to the official information, ZTE Axon 40 Ultra adopts an independent pixel drive scheme. Through independent pixel drive, the light transmittance of the screen is effectively better. It not only achieves an ultra-fine display effect of 400PPI but also guarantees a full screen of less than 2%. The brightness is decent and the screen integrates several features. ZTE claims that it is the most perfect full-screen solution so far.

This smartphone will come with a 6.8-inch OLED screen with a resolution of 2480 x 1116. To keep its lights on, this flagship will have a 4900 mAh battery capacity. However, its weight is not the lightest in the industry, 204g.

Over the past few days, there have been several reports regarding the optimizations of the ZTE Axon 40 Ultra. At the launch event on May 9, we will certainly have more official information. However, a couple of certifications is revealing what we should expect from this device. Today, a new certification in China reveals that the ZTE Axon 40 Ultra will have up to 12GB of RAM and 1TB of internal storage. 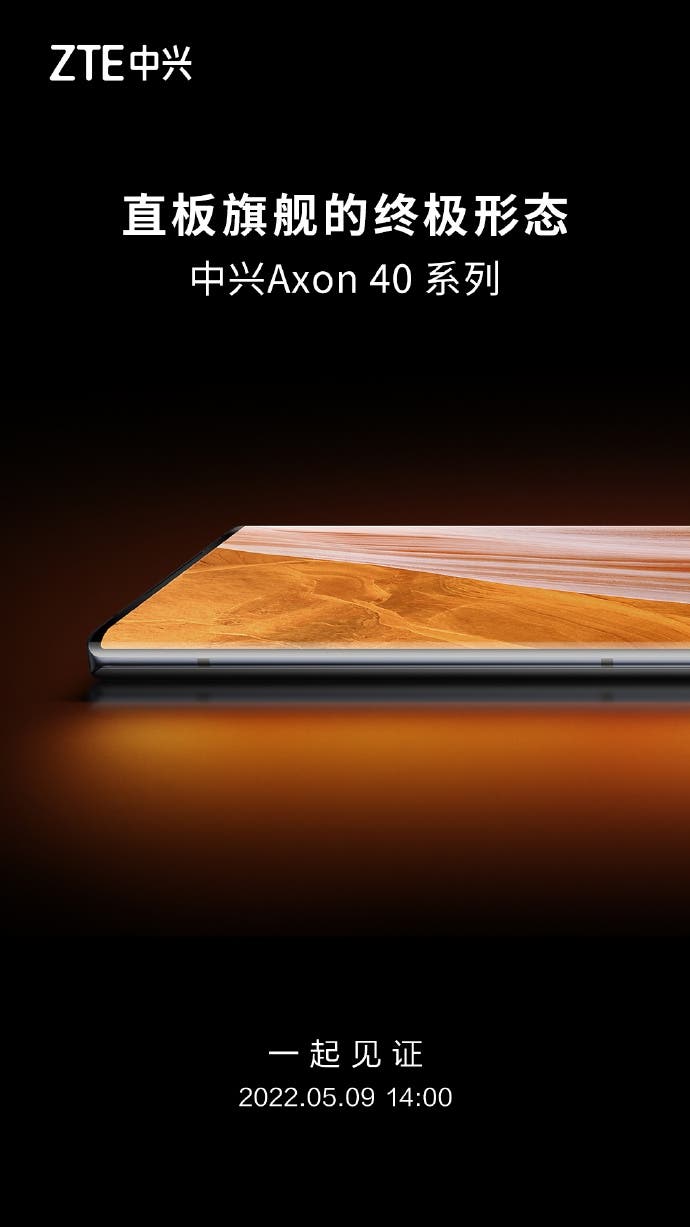 In addition, ZTE Axon 40 Ultra upgrades the front-facing camera algorithm. It uses Lingtong algorithm 3.0, which brings self-portrait effects comparable to those of hole-punch screen phones. Specifically, when the light passes through the screen and the sensor captures the picture information, the Lingtou algorithm 3.0 will fuse the multi-frame RAW data for HDR reconstruction. Then use the neural network noise reduction, neural network de-fogging, and fusion dual neural network image output, to re-optimize the system and capture a clear photo.

The real image of this flagship smartphone reveals that it achieves an almost 100% full-screen visual effect. Its screen-to-body ratio is very high and the top bezel is very narrow. Of course, the front camera is completely invisible.

It is worth mentioning that ZTE is also the only manufacturer in the global mobile phone industry that continues to develop a mass-production version of the under-screen proactive technology. Xiaomi has an under-screen smartphone but it appears that it is not continuously developing the technology.

Next TikTok will share ad revenue with video creators