UMIDIGI confirmed the new F3 series will come at its fan festival 2022 on AliExpress last week, and finally the company officially launched this amazing lineup today. As the successor of the top-selling F2, the new F3 series comes with 3 variants, F3, F3S and F3 SE, offering more choices for customers. The new devices will go on sale on May 19th, so let’s see whether they will be a major hit to the industry and whether you should wait to buy them.

All members of F3 series share the same dazzling matte finish and 3D curved edge design, which makes them look so thin and sleek. Without a doubt, the F3 is the most powerful device among them which comes with an Helio P70 CPU with 8GB RAM plus 128GB large storage. And it is equipped with a 5150mAh battery and 18W fast charging, so it can provide longer support than most devices. It features a triple camera system, including a 48MP main camera, an 8MP ultra-wide-angle camera and a 5MP macro camera. On the front, it has a 16MP selfie camera and a 6.7-inch ultra-large display, allowing you to take clear photos with high resolution and present what you captured on a stunning screen. 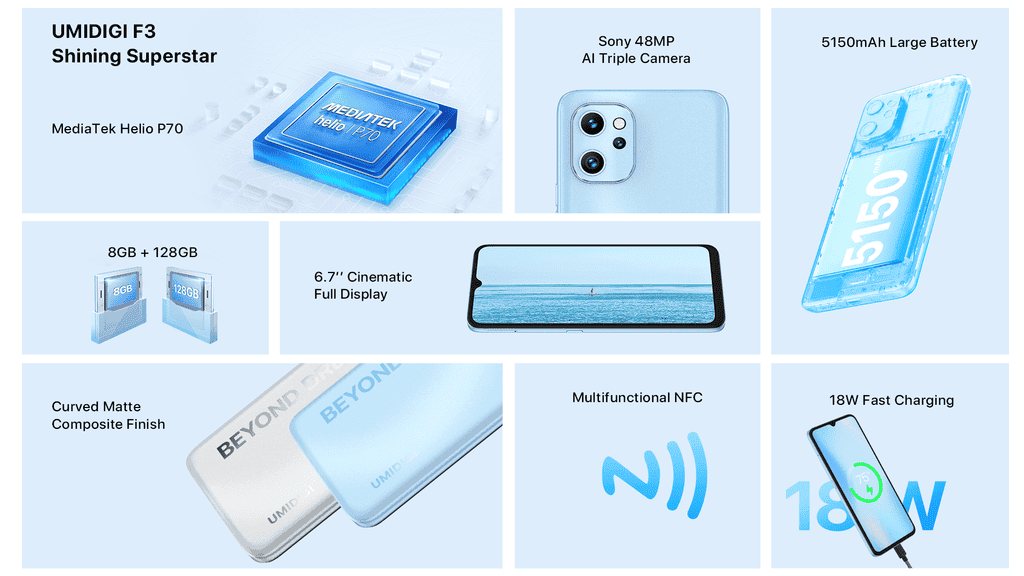 For higher security and more convenience, UMIDIGI F3 series all comes with an independent shortcut key and integrates the fingerprint sensor onto the power button. And they support almost all net bands of different regions, precise positioning system and headset-free FM radio, ensuring you are with connection wherever you go.

As different products, there are some differences among them. The chipset of F3S and F3 SE is Unisoc T610, and they have a smaller RAM and Storage, 6GB +128GB and 4GB + 128GB. Another difference is that only F3 and F3S support the NFC function, so you’d better choose from them if you need this function. In addition, the F3 SE comes with a dual-camera system, including a 20MP main camera and an 8MP ultra-wide camera. 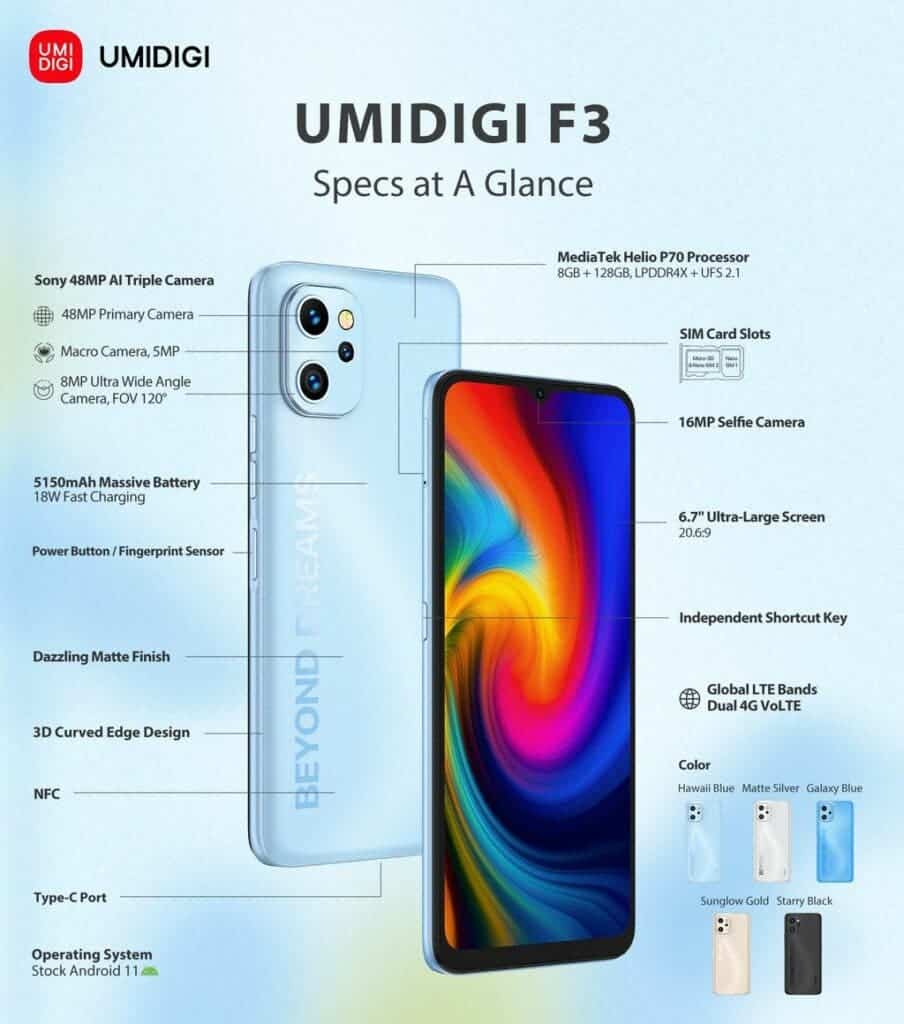 After launching the F3 series, the company also raised a new concept – Gemini Series of F3 & A13, on the basis of similar but slightly different designs, trying to create a marketing concept of a best-selling combo to win the greater smartphone market. Both two series feature a dazzling matte back finish, but the F3 series features curved edges while the A13 series features a flat-edge design. Therefore, the similarity and difference between curved-edge and flat-edge perfectly show the combination of rigidity and softness, Yin and Yang, dynamic and static, bringing customers a double enjoyment of visual and tactile. Without exaggeration, this unprecedented innovative Gemini concept will shock the industry and lead the company to the next level. 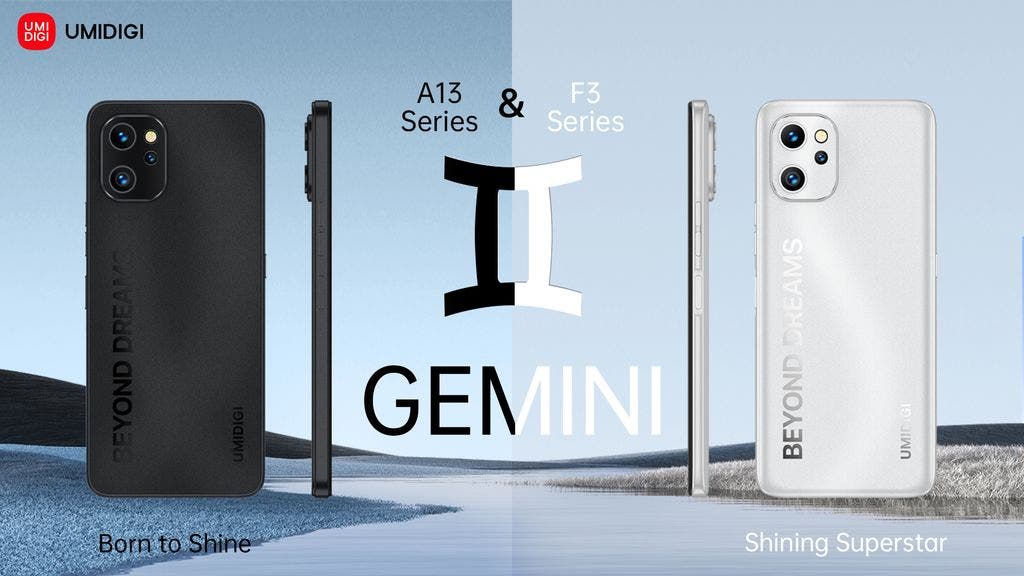 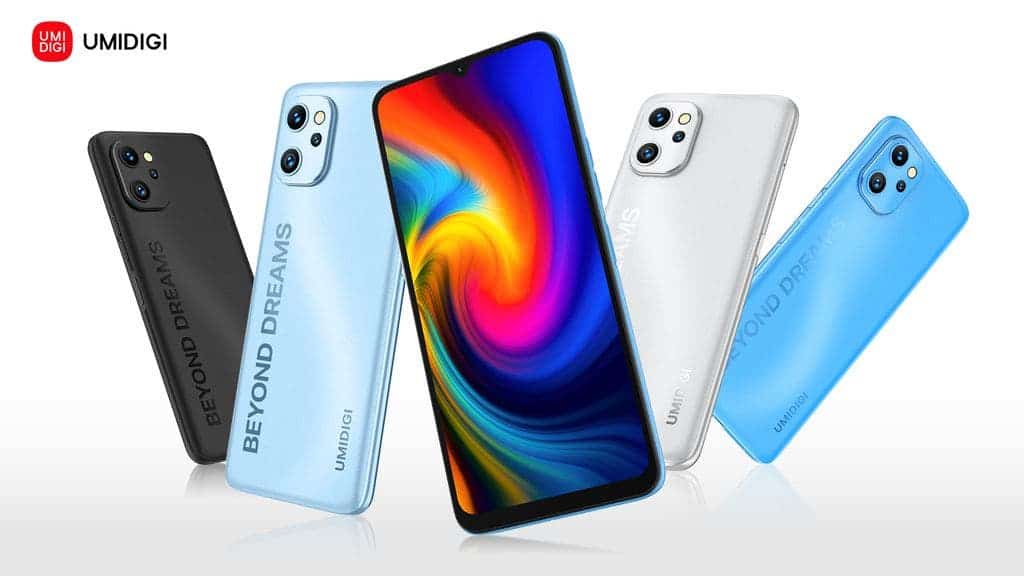 In addition, UMIDIGI is running a global giveaway on their official Facebook page, where 3 winners can get the new F3 for free. If you are interested in this product or you want one for free, you can go to their Facebook page to learn more and join in. 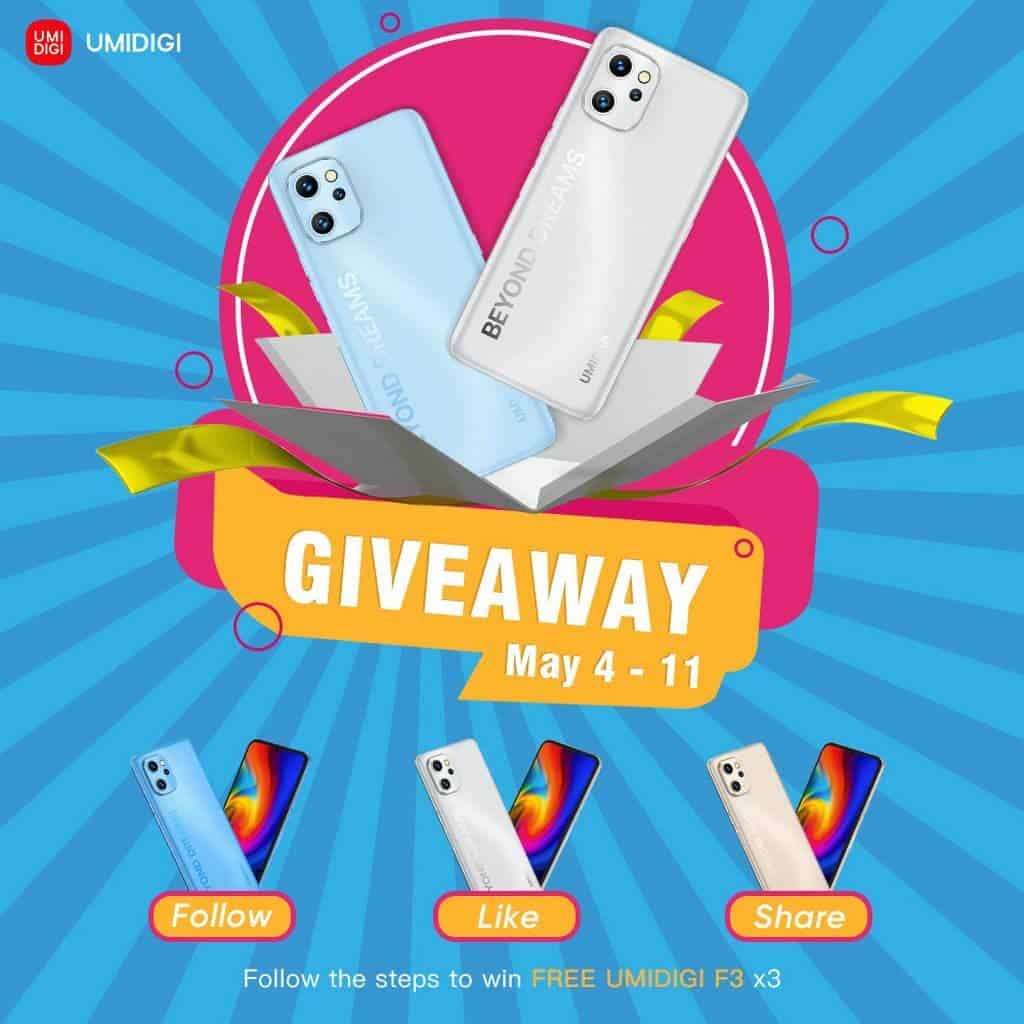 Next How to get MIUI 13 Live wallpapers on MIUI 12.5 devices