While the launch of the Galaxy Z Flip 4 is not expected before this summer, Samsung‘s next foldable smartphone has already appeared on the Geekbench 5 benchmark, which confirms the processor that will power the device.

Only a few days after the leak of its design by OnLeaks with magnificent renderings, we now know more about the technical data sheet of the Galaxy Z Flip 4. On Twitter, leaker Ice Universe shared the first benchmark of Samsung’s next foldable smartphone, and this one is equipped with a chip from Qualcomm that has not yet been unveiled.

Indeed, the benchmark confirms that the upcoming Galaxy Z Flip 4 will be running by a new Snapdragon 8 Gen 1+ chip, as previous leaks had claimed. This high-end chip is no longer the production of Samsung, but by TSMC. It will allow the Galaxy Z Flip 4 thanks to increased frequencies to be more powerful than the Galaxy S22 Ultra, yet sold more expensive.

According to the benchmark, the Galaxy Z Flip 4 managed to score 1277 points on one core; and 3642 points on multiple cores. This makes it one of the most powerful Android smartphones on the market. Geekbench reveals that the Snapdragon 8 Gen 1 still uses an 8-core configuration; this time with a 3.19 GHz Cortex-X2, three 2.75 GHz Cortex-A710s and 4 1.8 GHz Cortex-A510s. 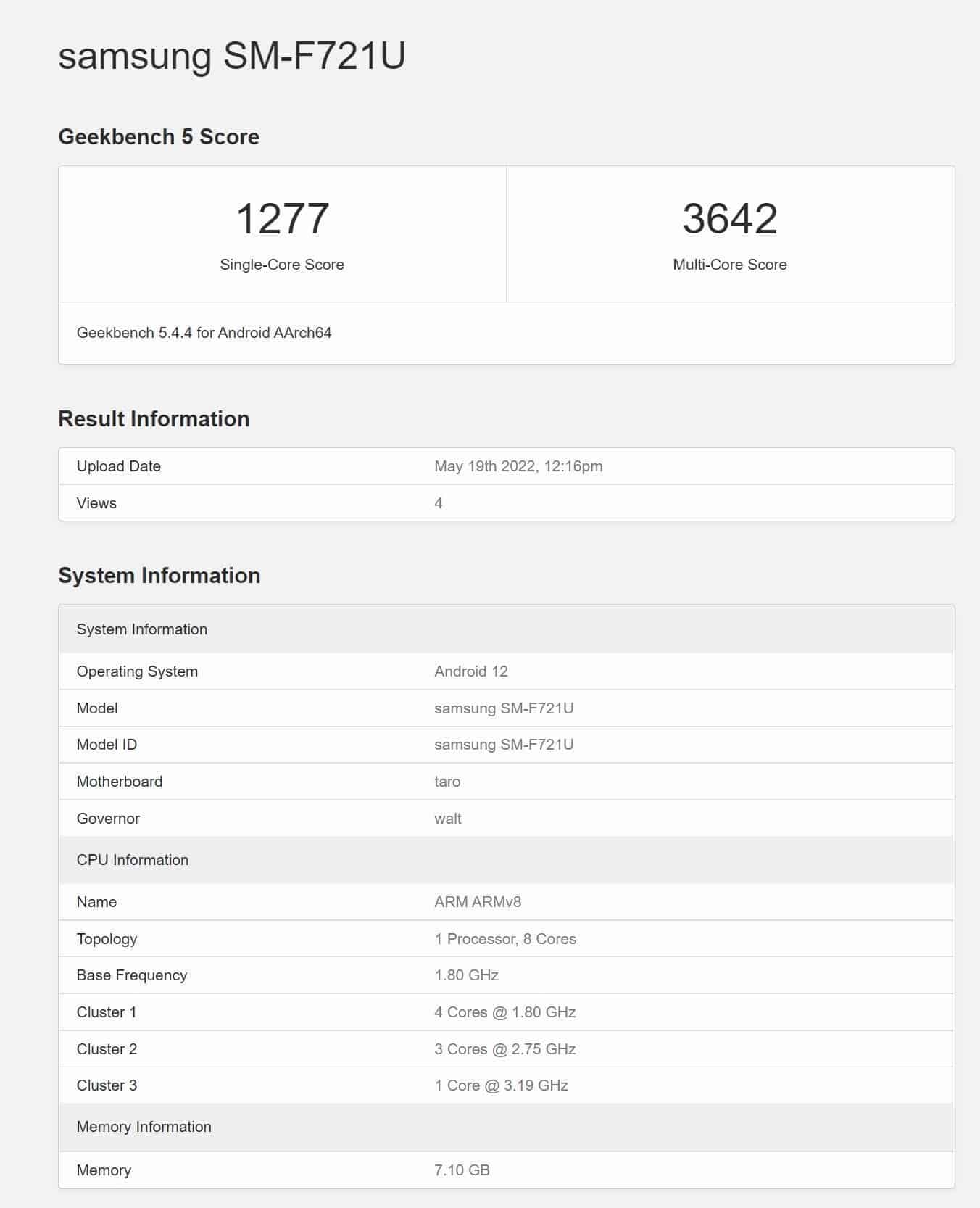 The frequencies have therefore been significantly higher in comparison to the current Snapdragon 8 Gen 1; which rises to 3.0 GHz, 2.5 GHz and 1.8 GHz respectively. According to leaker Digital Chat Station on Weibo, Qualcomm will officially announce a 10% increase in frequencies; but also 30% lower power consumption and 30% higher energy efficiency.

With Snapdragon 8 Gen 1+, Android smartphone makers hope to deliver smartphones that overheat less. We know that this chip will also arrive in the next Galaxy Z Fold 4, but also from other manufacturers. We expect that in particular that the OnePlus 10 Ultra; as well as the Xiaomi 12 Ultra which will also launch this summer will run it.