Xiaomi Band 7 will be unveiled at the Redmi new product launch conference. This event will hold at 19:00 on May 24th. The company will not only release the standard Xiaomi Band 7, it will also unveil an NFC version as usual. The latest information regarding this band is that it currently has a landing page on JD.com. This device is also available for reservation. The appointment deadline is May 31, which also means that the new product will be officially launched a week after its release.

The Xiaomi Band 7 continues the design of the previous generation. It uses a 1.62-inch AMOLED display with a 25% increase in the viewing area. According to previous information, Xiaomi Band 7 supports a variety of sports modes, customized UI and NFC functions. It also supports multi-platform adaptation.

Furthermore, this band will also support a resolution of 490 x 192 pixels, a 250 mAh battery; and, possibly, a blood oxygen level sensor. However, we will for sure get more details in this regard in a few days. While Xiaomi Fit is popular with Xiaomi bands, it will not be the app for Band 7. Xiaomi already has the Zepp Life app on Google Play Store and this will be the app for the Xiaomi Band 7. 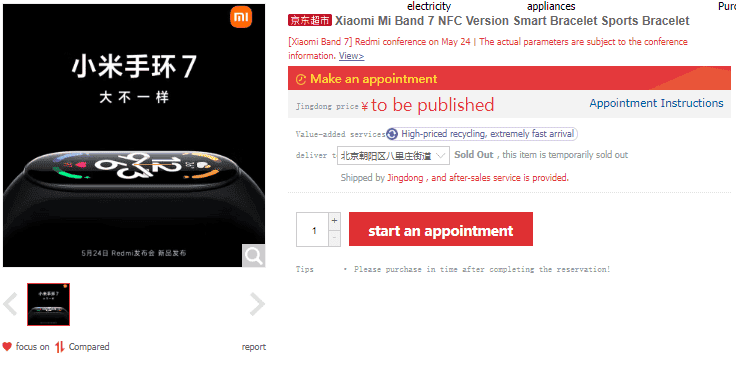 Zepp OS is a software platform for Amazfit wearables by Huami production. Huami is behind the development of the Mi Band; so the renaming of Mi Fit to Zepp Life is not surprising. On the other hand, this may indicate that the new Xiaomi fitness bracelets (Xiaomi Band 7) will also move to Zepp OS. Actually, this was available in the previous leak about Mi Band 7 in early March.

The Zepp Life app does not necessarily bring anything new. In fact, this application is basically the same as the Xiaomi Fit app. Xiaomi has a seamless transition between the Mi Fit and Zepp Life. Just get the latest Mi Fit update and boom, you are on Zepp Life.

The most notable feature of the impending fitness band is the presence of in-built GPS. In other words, users will be able to track activities such as walking and running without requiring their smartphones. To recall, Band 6’s firmware had previously indicated that it will support built-in GPS. However, the feature was missing in the final product. Furthermore, the fitness band will have a Smart Alarm feature. This feature will ensure the user wakes up from light sleep half an hour ahead of their predefined alarm. Lastly, the new fitness band’s Power Savings mode can extend the battery life.

Previous Android Vs Windows Vs macOS - which of these have more malware?