Microsoft surprised everyone last year with the introduction of Windows 11. The launch was surprising due to the fact that the company has formerly promised to keep supporting Windows 10 for the time being. However, we assume that the demand for something new and the appeal that it brings pushed Microsoft’s decision of bringing a new numbered version. Windows 11, in essence, was very similar to Windows 10, but finally got rid of some elements from the Windows 7 era. The menus are also different, and the company added some features. For instance, there is an underlying Android version that can be used for running some applications, the new Windows 11 also brought back the legendary Widgets. However, the feature wasn’t much use with just a few stock apps offering support. Now, this will gonna change as Microsoft announced that the OS will offer third-party developers to offer widgets.

It’s a significant change, but maybe not the most surprising. After all, while the Windows 11 initial update came only with first-party widgets support, we knew that the company was planning to expand this. Just like Windows 10, the new OS version will have a progressive development with features being added in each bigger half-year update. Currently, there are only 11 widgets available in Windows 11. They consist of weather, sports, gaming, photos, watchlist, entertainment, traffic, To Do, Outlook Calendar, Family Safety, and tips. The weather widget even shows the temperature and weather in the taskbar. However, they can’t swap out information with quick info from another widget.

The Widgets have their own panel, they sit at the bottom-left corners of the screen. You’ll eventually hit it if you’re coming from Windows 10, after all, that was the former position for the Start button, which now sits in the middle. Despite the new feature, the widget panels aren’t going anywhere. The only novelty is the possibility of adding more widgets in the future. We don’t know exactly how that will work and what kind of Widgets you’ll be able to add there. Maybe, a feed for Facebook, Instagram, and other social media apps, among other things. Time will tell. 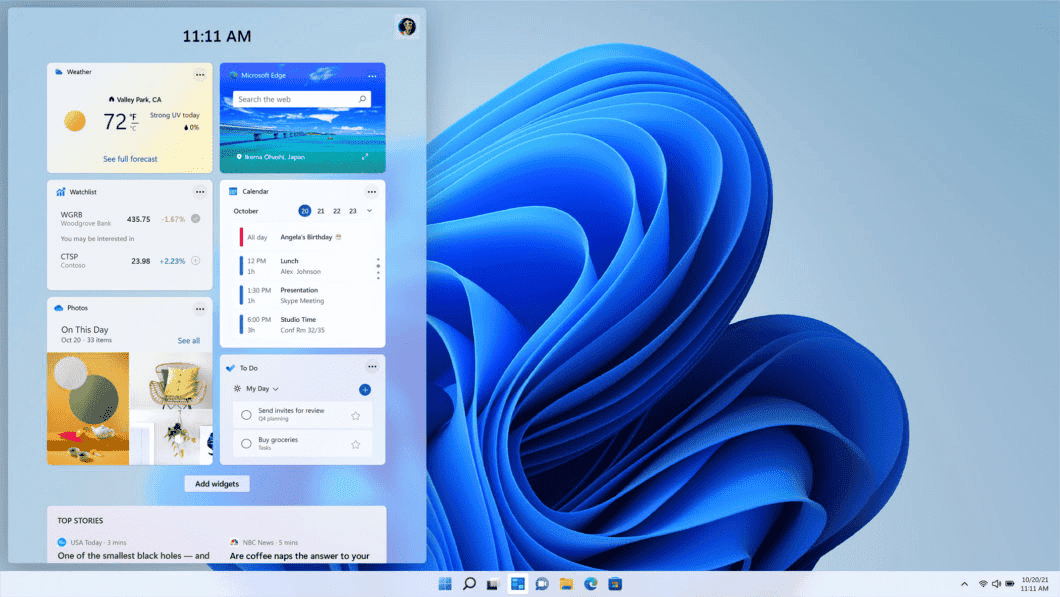 The OS will allow developers to build widgets in Win32 and PWA apps. They’ll use the Adaptive Cards platforms to do so. Worth noting, that the company has recently added search to the desktop for Windows Insiders on the Dev channel. Perhaps, in the future, users will be able to put widgets on the desktop. This was the way that Widgets worked within previous Windows versions.