Over the past few years, there has been a market transition from wristbands to wristwatches. According to Canalys, the global shipment of the wearable band fell 4% to 41.7 million units in Q1 2022. Wristband watches (both base and smartwatches) account for 76.6% of all wearable wristband device shipments in the first quarter, up 15% to 32 million units. 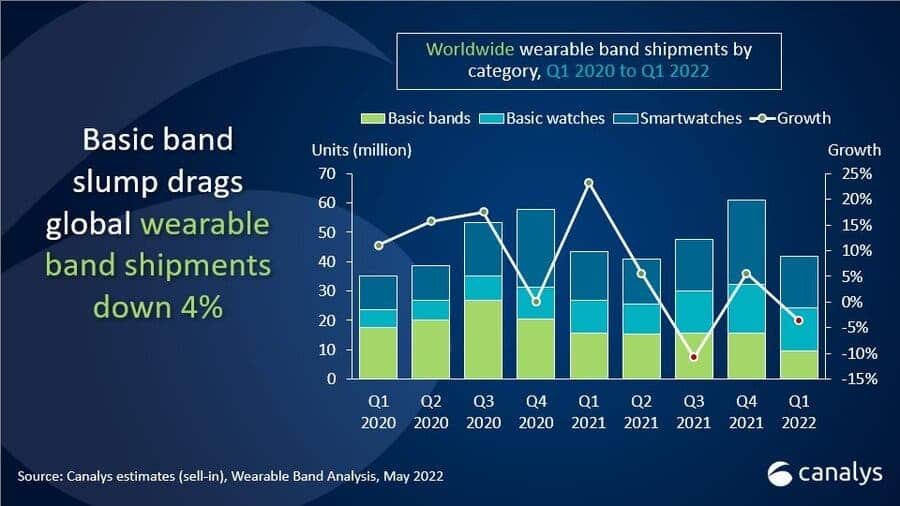 After the first five quarters, shipments of basic bracelets suffered their sixth decline, falling 37%. Canalys said after reaching 27.9 million units in the fourth quarter of 2019, shipments of basic bracelets fell all the way, dropping below 10 million for the first time. While the increase in wristwatch shipments helped offset the decline in basic wristbands, it was still unavoidable that the overall wearable device market would decline.

Thanks to the strong demand in the market, Apple still maintains a leading position in the field of wrist watches. Canalys analyst Cynthia Chen said: “Despite a 53% increase, Samsung was beaten by Huawei to take third place. While the device mix of wristbands and watches improved, Huawei’s smartphone business shrunk. Shipments are still on a downward trend. Xiaomi has overtaken Garmin for fourth place due to the growing global supply of its Mi and Redmi base watches.”

Switch from bands to smartwatches

A recent survey by Canalys reveals that “out of 4,000 respondents from four Western European markets, 34% said they intended to buy a smartwatch in the next 12 months, against 17% who would choose a fitness band. Smartwatches stood out as the most popular companion device to smartphones for Western European consumers. The survey results corroborate Canalys’ expectations that future consumer demand will shift away from basic bands to watches. This will potentially affect vendors such as Xiaomi and Fitbit, which are still shipping basic bands in significant numbers”.

There is a reason for the shift from smart bands to smartwatches. The major reason is the limit on the operation of smart bands. While smart bands are compatible with rudimentary real-time operating systems, they do not support third-party apps. This is one major advantage of a smartwatch over a smart band. Smartwatches do not only run their independent operating systems, it also supports third-party applications. “Consumers are favoring watches over bands. With bigger displays, richer features, and longer battery life, they believe watches are better able to fulfill their health-tracking and digital lifestyle needs,” said Sherry Jin, Canalys Research Analyst. “Basic watches are positioned as an affordable step-up from basic bands, suitable for price-conscious consumers with growing expectations as to what wearables can do.”

Fire-Boltt Ninja Bell Launches In India, Get A Notable 70% Off On Flipkart