According to the latest report from well-known market research agency, IDC, the global smartphone shipments will decrease by 3.5% in 2022 to 1.31 billion units. However, in 2023, IDC predicts that there will be a rebound with shipments increasing by 5%. IDC previously predicted that smartphone shipments would grow by 1.6% in 2022. However, it has now revised its data to show that the market is not in good condition. Still, IDC sees a short-term pullback in the market, with a 5-year CAGR of 1.9% through 2026. 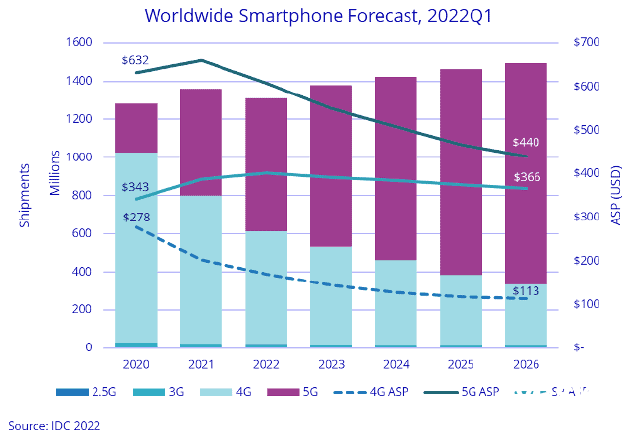 In fact, in recent months, many OEMs have cut orders, including Apple. However, IDC is still optimistic about Apple, believing that its ability to withstand pressure is stronger. This is because Apple has strong control over the supply chain and its customers are more high-end. Thus, the company has a stronger immunity to macroeconomics. The semiconductor supply problem will ease in the second half of 2022. However, the supply of 4G chips is still tight as the market is shifting to 5G.

The average selling price of a phone in 2022 should be around $402, falling to $366 in 2026. In addition, IDC claims that the global smartphone shipments in the second quarter of this year should be about 309 million units. This is comparable to the first quarter but does not rule out the possibility of a downward adjustment. The current reality is that the demand in the smartphone market has dropped significantly in the past two years. In addition, under the cover of the pandemic, mobile phone manufacturers are also reducing production.

The report also claims that Apple originally planned to increase production of iPhone 13 Pro series in the second quarter. However, the latest report points out that Apple has been unable to stay out of the way and is likely to cancel its plan to produce 20 million more phones in 2022.

Brands can not evade orders cut

For mobile phone manufacturers, it is unavoidable to cut orders and reduce production, because the current demand of the entire mobile phone market is difficult to compare with a few years ago. Also, young people who are the main consumers of mobile phone products are more reluctant to change mobile phones.

According to data released by market research firm Canalys in May, in the first quarter of 2022, global smartphone shipments were 311.2 million units, down 11% year-on-year. The repeated outbreak of the epidemic has led to tight supply chains, and the industry’s involution has pushed forward the stagnation of product power.

Furthermore, the price of foldable smartphones are dropping this year by year. Furthermore, there are reports that users may have to turn to tablet PCs.