Sony Interactive Entertainment (SIE) global sales and business operations director and senior vice president Veronica Rogers confirmed that Sony PS5 global sales have exceeded 20 million units. Since its release in November 2020, the console has been unabated. If it weren’t for parts shortages, it should have completed that milestone earlier. The company also highlighted that they plan to significantly ramp up console production for the rest of the year. Veronica Rogers said: “We are pleased to report that Sony Interactive Entertainment (SIE) has sold over 20 million PlayStation 5 consoles worldwide.”

“Since the PS5 was announced, our team has worked tirelessly to deliver a truly next-gen console that has won the world over. We would like to take this opportunity to thank our fans for your passion for PlayStation. It’s what drives us to innovate, innovate technology, design games and create the best places to play.”

“And for those fans who haven’t gotten their hands on a console yet, we’re planning to ramp up PS5 production significantly this year. Also, we’ll be working nonstop until the Sony PS5 is in the hands of everyone who needs it.”

In a previous report, Sony said the PS5 (in its first full fiscal year) sold 80,000 consoles in just 82 minutes. In comparison to the PlayStation 4 which hit 80,000 in just 9 days, PS5 still lags. Although the Sony PS5 sales still lag behind PS4, the company expects the PS5 to overtake the PS4 in its fourth year of release.

Sony has shared the latest official PlayStation sales data and predicts that the next fiscal year will usher in substantial growth. The department briefing shared by Sony SIE President, Jim Ryan shows that Sony PS5 sales in China have reached 670,000 units (after 72 weeks of release). Furthermore, there are now about 295,000 PS+ member users, and the regional ranking has risen to No. 6. China has an average cost of $223 per activation machine (approximately RMB 1495) to purchase content. All figures are a big increase relative to the previous PS4. 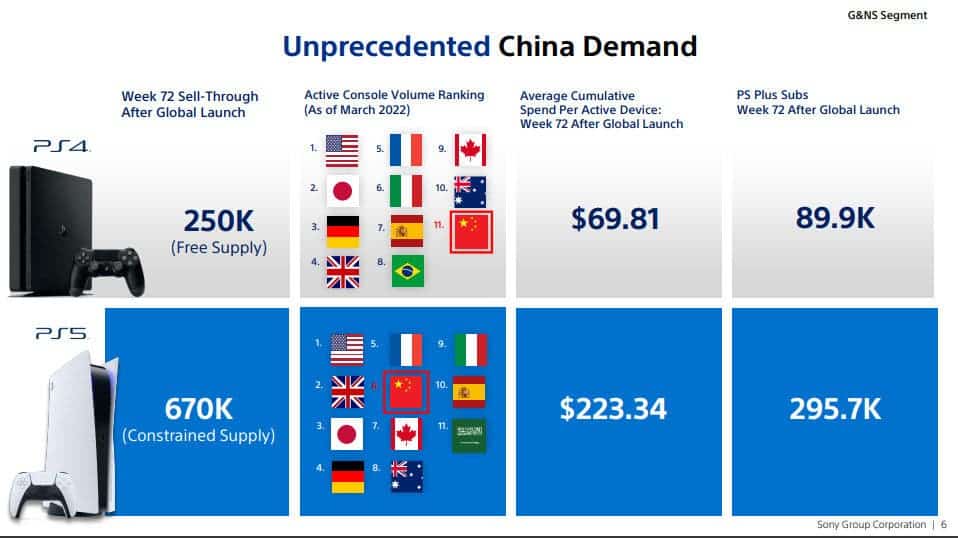 Jim Ryan talks about Sony’s gaming and network services division. In his statement, he shares some interesting tidbits about the former PlayStation exclusive recently. He believes that PlayStation Studios is currently limiting itself to a fairly narrow segment of the gaming market. According to him, by 2025, Sony will release 25 games, about half of which will be PC and mobile games. This is in addition to at least 12 instant games.

Jim Ryan said: “Sony first-party games have historically captivated players with rich storytelling, beautiful graphics, and great gameplay. However, we do limit ourselves to a relatively narrow market, PC, mobile, and live streaming. There is a huge potential consumer base, and we have the opportunity to move from what is now a narrow segment to a ubiquitous state”. 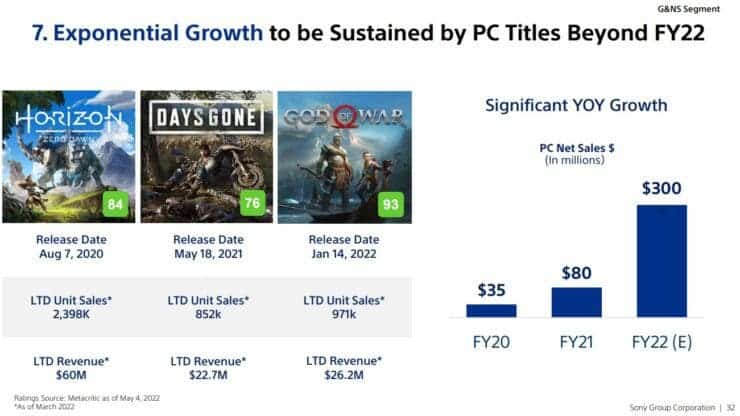 The exponential growth in the PC versions of these former PlayStation exclusives has been remarkable. This is clearly observable in the presentation by Ryan and Sony expects this growth to continue throughout fiscal 2022 and beyond. There are reports that in fiscal 2020, PC game net sales were $35 million. Furthermore, in fiscal 2021, this figure will grow to $80 million year-on-year.

In addition, Sony also mentions some other data in this new business description in the field of game & network services. The contents worth mentioning are as follows:

-The demand for Sony PS5 is also unparalleled in the past. Compared with the past, it took 9 days for PS4 to reach 80,000 units sold in US retail stores. Sony PS5 hit this number in only 82 minutes, which means that PS5 is selling at a speed of about 1000 units per minute.

-PlayStation has become the world’s top brand, rising from the previous ninth to seventh.

– The cumulative sales rate of Sony PS5 will surpass PS4 after 2023, but supply shortage remains a major problem in PS5 sales. The official compared the sales speed of PS5 and PS4 since their launch in this data. Obviously, the sales of PS5 exceeded that of PS4 in the first year. However, in the second year, the sales speed declined due to the impact of the epidemic. In the face of some “short-term risks”, the company immediately took measures such as securing logistics routes and procuring parts from more suppliers, and the pace of sales has now picked up.

-PS PLUS member satisfaction on the PS4 platform is 72%

-According to predictions, by 2025, about half of the games will be on PC and mobile platforms. Also, the remaining half will be PS5 platform titles. Especially now that the company is now planning to significantly increase the sales of PC platform games.

According to Ryan, God of War’s popular PC side is also performing quite well, selling nearly 1 million copies (971,000 copies) in less than three months (released on January 14, 2022). The PC revenue for this popular game also exceeds $26.2 million.

It appears that the Microsoft Xbox Series X did not put up a decent fight against the Sony PS5. The latter has about 12 million units so far but there is no indication that it can surpass Sony PS5. With the current sales of the PS5, this device will be hot for quite some time.

Next What Technologies Are Used In The War In Ukraine?