AMD has been a strong force in the CPU market thanks to its Ryzen series. After tepid years with the FX series, the company managed to perform a twist with the arrival of the Ryzen CPUs. These are often the favorite choice of enthusiasts and those who want a strong CPU with decent value for money appeal. The company is expected to make its move this year and introduce the Ryzen 7000 series. Today, the leakster @Greymon55, revealed that the Ryzen 7000 series will mark AMD’s entrance into the 5 nm node. Furthermore, the first batch of Ryzen 7000 CPUs include four models.

The New Ryzen 7000 series – launch lineup has been revealed

According to the tipster, the AMD Ryzen 9 7950 XT MSRP will be slightly cheaper than the 5950X. In addition to that, the new CPU will also offer support for DDR4 memory, however, the tipster did not confirm whether it will be listed. The frequency of the upcoming chipset is impressive with all cores going up to 5.5 GHz. 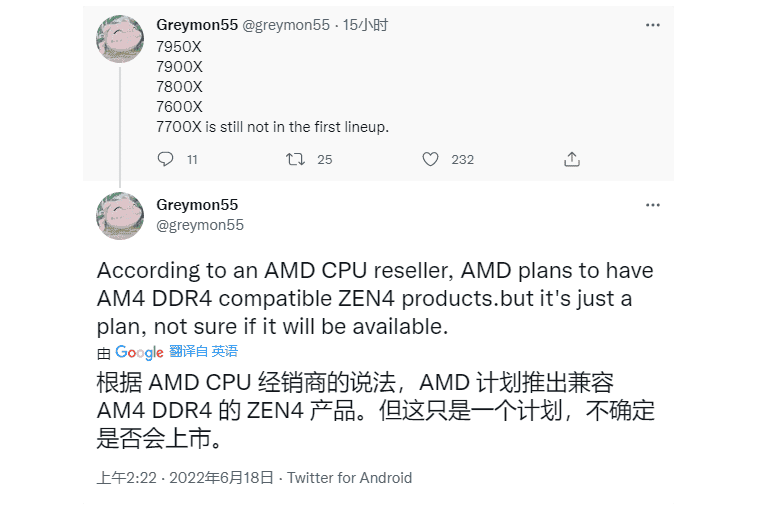 In addition to the Ryzen 7000 news, the leakster @9550pro also said that the performance of AMD Raphael and Intel Raptor Lake in this generation will be similar. Both can reach up to 5.5 GHz speeds. However, the Alder Lake to Raptor Lake IPC’s increase is less than 5 percent. The AMD Zen3 to Zen4 architecture has seen an 8 percent increase.

We expect AMD to make its move in the next few months. However, getting one of these immediately after launch should be a hard task as usual.