Back in the last month, Realme introduced new contenders for its Narzo series in the form of Realme Narzo 50 Pro 5G and Realme Narzo 50 5G. These devices were introduced in India recently, and now, the company plans to introduce a new Realme Narzo 50i Prime variant. As per a new report, the phone will hit India on June 22. Along with the confirmation, we have some key specifications. The device is a super-budget smartphone, unlike the other mid-range offerings.

The confirmation comes from the folks at 91Mobiles in collaboration with OnLeaks, the Realme Narzo 50i will hit India on June 22. The device will have a super appealing price tag below $100, which means something close to INR 7,800. It will be available in two colorways – Black and Green. The leak also brings some details about the Realme Narzo 50i Prime. 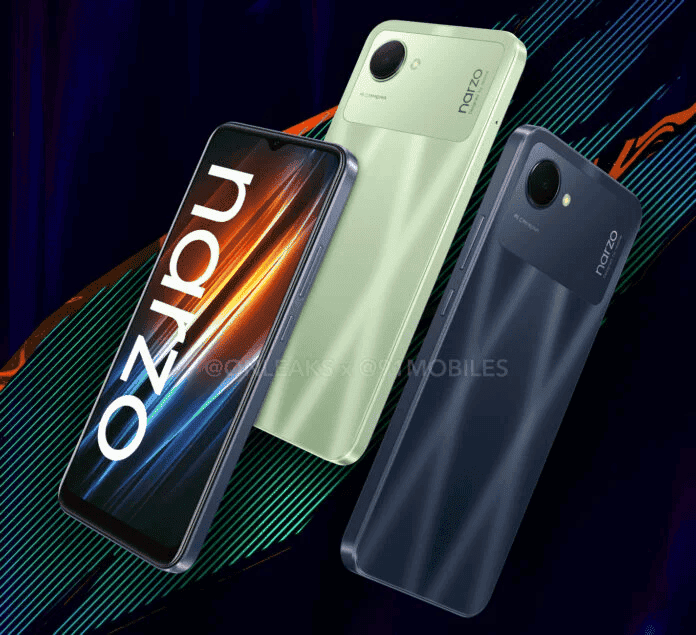 Judging by the leaked material that includes renders, the device has the traditional design of a budget smartphone. Looking at the front, the phone has a waterdrop notch, thin bezels, and a large chin. Other than that, the report confirms that the smartphone will indeed include a single primary camera. Moreover, it will house a selfie shooter in the notch. The phone has a single camera at the back, and we expect it to be a modest one.

As per the leak, the phone will come in variants with 3 GB of RAM and 32 GB of storage, and 4 GB of RAM with 64 GB of Internal Storage. Furthermore, the device will draw its powers from a 5,000 mAh battery. Unfortunately, it will charge slowly with 10W charging. The phone has 8.48 mm in thickness and weighs 181 grams. According to the FCC listing, the phone will be based on the existing Realme C30 and will bring the MediaTek Helio G80 SoC. It’s an old chipset but is still better than some offerings in the low-end segment.