A new PCI express has been introduced, though PCI Express version 5.0 is yet to become the dominant standard in the industry, PCI-SIG is here with PCI Express 7.0 standard. Talking about the former, it was introduced in 2017, but only a few motherboards and CPUs have compatibility with the PCIe 5.0 standard. Therefore, there is still a long road until PCI Express 7.0 becomes a reality for the final consumer.

PCI-SIG has made an “introduction” to its new product. After all, the final specification will arrive by 2025. Then, the first PCIe 7.0 devices may hit the market by 2027 or even after. Of course, we all need the PCIe 6.0 to become mainstream first. This one may appear in server parts by the end of 2023.

“With the forthcoming PCIe 7.0 specification, PCI-SIG continues our 30-year commitment to delivering industry-leading specifications that push the boundaries of innovation,” said Al Yanes, PCI-SIG president, and Chairperson. “As PCIe technology continues to evolve to meet the high bandwidth demands, our workgroups’ focus will be on channel parameters and reach and improving power efficiency.” 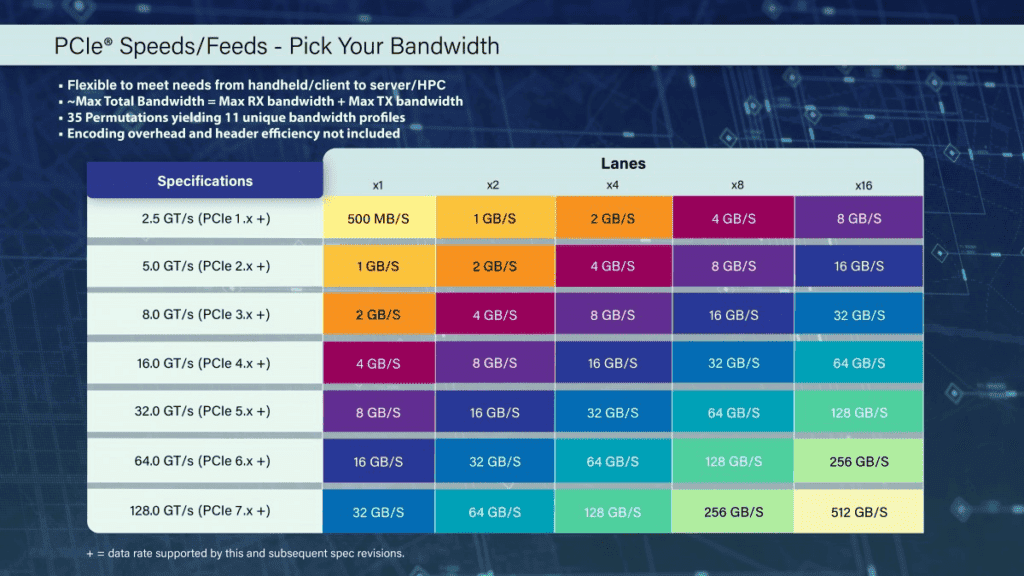 The new PCI Express 7.0 standard is four times faster than the v5.0. The difference is smaller when we compare it with its predecessor, but it still represents a big boost in bandwidth. Apparently, the new PCIe 7.0 will transfer 32 GB/s on a single bi-directional connection. That is as fast as a full 16x PCIe 3.0 connection, which was standard on beefy GPUs until recently. The maximum bandwidth is 512 GB/s for a 16x connection.

The PCI Express 7.0 standard will use PAM4 signaling. That was introduced with version 6.0. The new generation’s goal is to improve power efficiency. It also will work to keep a low latency maintaining backward compatibility with previous standards. Of course, if you’re not an enthusiast or someone involved in advanced computing hardware, the PCIe 7.0 launch does not mean much. As previously stated, there are still long years to come until this standard becomes dominant in the industry. And of course, until then, we’ll have newer generations.

Let’s see if the new standard will be enough to revolutionize the PC segment in the future. Of course, everything depends on the growth of ARM-based business.

Next Amazon Alexa Will Get A Feature To Mimic Anyone's Voice