ARM made its name in the GPU segment with its proprietary Mali GPUs. However, the gaming segment is advancing on Mobile, and there are many advanced GPUs emerging such as the Samsung and AMD’s custom-developed Eclipse X GPU. ARM sees it’s time for a new GPU lineup and is presenting the Immortalis-G715. The company will pursue the competition with a new GPU lineup designed for premium and mid-range smartphones that brings support for ray-tracing. Although this is still not explored by mobile games, more GPUs with ray-tracing support are emerging. So it’s just a matter of time until mobile games with console-like graphics emerge.

The Immortalis-G715 is ARM’s first GPU to have hardware acceleration for ray tracing. The last year’s Mali-G710 was capable of doing so with software, but hardware support is the real deal. It takes up only 4% of the shader core and improves performance by more than 300%. Below is a demo that shows the quality improvements of in-game graphics. Users can expect ray tracing to reach the mobile segment in the next few years. The first chipsets with Immortalis-G715 will appear in early 2023. Since Samsung seems to be sticking with AMD, and Qualcomm has its own Adreno GPU, MediaTek may play a big role to popularize the Immortalis-G715. After all, its flagship SoCs are using ARM’s GPUs. The Taiwanese chip maker took to Twitter to congratulate the company.

Anyway, the Mali lineup is not gone. The company has presented the Mali-G715 GPU as well as a Mali-G615 GPU. The major difference between the two is the core counts. The G615 has up to six, while the G715 has variants with 7 to 9 cores. The Immortalis-G715 has 10 or more cores. 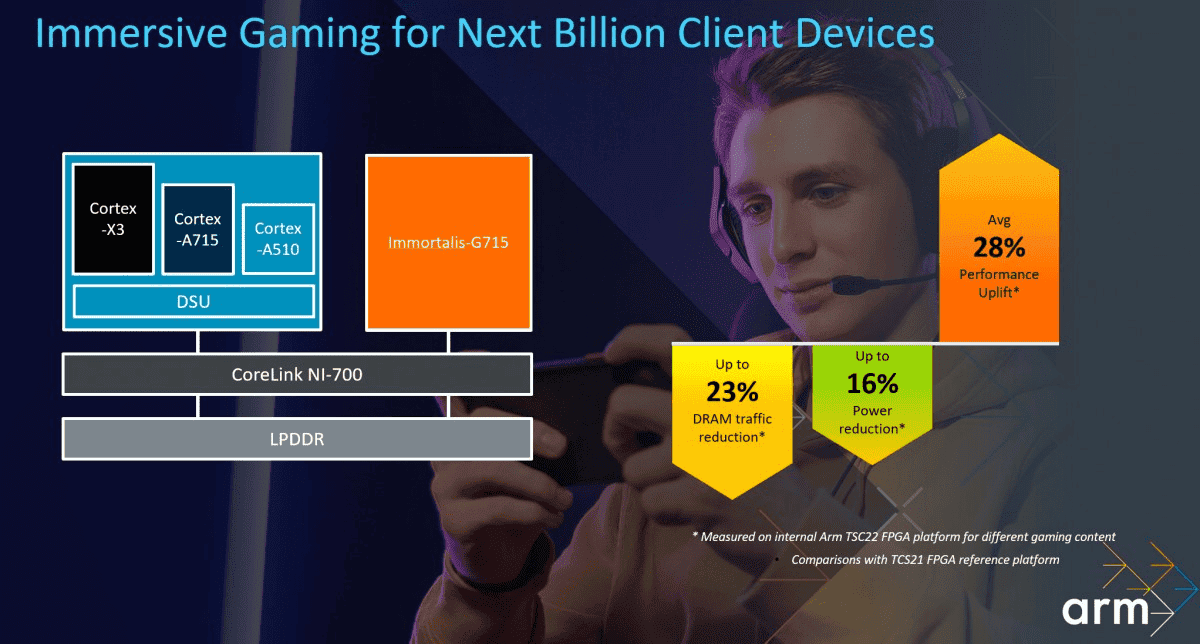 All three new GPUs support Variable Rate Shading (VRS). It allows the game developers to tell the GPU where to focus its efforts, rendering things at full resolution and where it can take shortcuts. When done correctly, the game looks the same to the player. However, the frame rate can increase by up to 40%. This can significantly reduce power usage instead, which is important on battery-powered smartphones.

Next Xiaomi Black Shark 5S specs have been tipped