The global smartphone market is very complex and victory in a particular market does not guarantee any brand global victory. The Chinese, Indian and U.S. smartphone markets are the top three in the world. Smartphone brands struggle to claim the top spot in these markets because claiming victory in these three markets is very pivotal to global victory. However, in recent years, no single brand has been able to claim the No. 1 spot in these three markets. Nevertheless, the battle is between South Korean manufacturing behemoth, Samsung and American tech giant, Apple. The results so far reveals that Samsung has an edge over Apple. 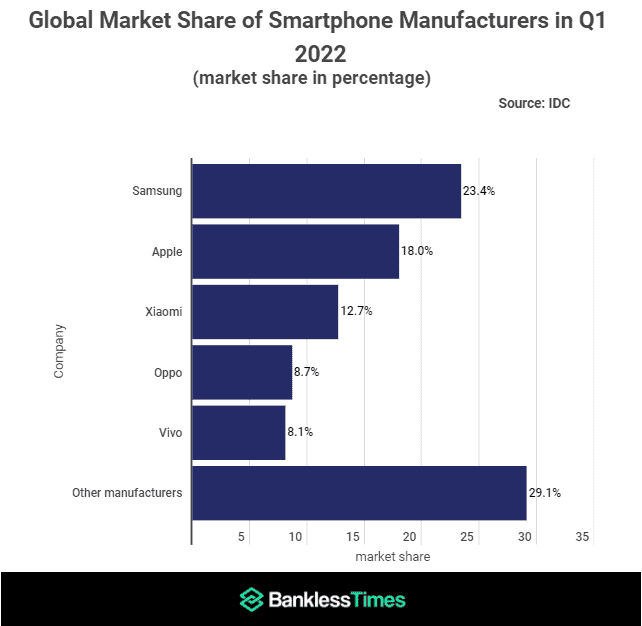 According to a report from BanklessTimes, Samsung’s shipments in Q1 2022 is way ahead of Apple. The analysis reveals that Samsung’s total shipments for Q1 2022 is 73.6 million units. This is no less than 17 million units ahead of its closest rival, Apple. With this figure, Samsung has a global smartphone market share of 23.4%.

“Samsung is renowned for creating attractive and innovative products that meet consumer needs…it has established a leadership position in the smartphone market due to its long-term strategy focusing on low and mid-tier models. In addition, its focus on end-user experience allows it to deliver a wide range of differentiated products generating significant volumes.”

Read Also:  Apple iPhone 14 To Be Made In India, Here's What We Know

Oppo and Vivo completes the top five brands with 27.4 million and 25.3 million shipments respectively. These brands have a market share of 8.7% and 8.1% respectively. However, like Xiaomi, they also recorded a decline of 27% and 28% respectively.

Next Xiaomi 13 exposure - to use a Samsung-like design