Oppo wants to put its name in the headlines and also in the mind of global customers. Of course, as the old saying tells “In a business, advertising is everything“. The tech company has just firmed a sponsorship deal with UEFA, The Oppo and UEFA sponsorship deal will last two years. The tech company will advertise its products in multiple tournaments. Obviously, this means that fans of the massively popular UEFA Champions League will see Oppo’s name all around. The deal covers the next two seasons – 2022 / 2023 and 2023 / 2024. If it proves to be successful, we won’t discard future partnerships.

Oppo and UEFA partnership to innovate in times of adversity

As part of the sponsorship deal, Oppo will enjoy the visibility of its brand on broadcast backdrops. There will also be some advertising panels at stadiums. It also includes key spots on the website. The social media of the Champions League and Super Cup will show ads here and there. The Oppo and UEFA deal also expands to the Futsal  Champions League Finals and the Youth League Finals. 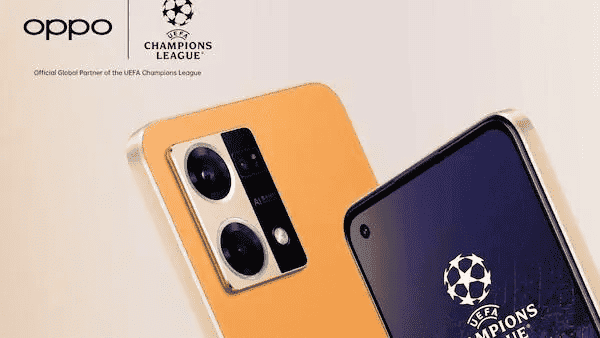 William Liu, the President of Global Marketing at Oppo says that the company “Believes in the power of innovation”. Furthermore, he states that “innovation helps with life’s challenges”. The executive states that the company is in synergy with UEFA’s desire to fight in the face of adversity. As a result, the Oppo and UEFA deal is the perfect partnership! It brings benefits for both parties.

Guy-Lauren Epstein, the Marketing Director at UEFA confirms Liu’s words. Moreover, he states that both parties are willing to work together. They will “connect and inspire football fans around the world”.

The partnership may give birth to special smartphone editions

The Oppo and UEFA partnership may bring very positive results for Oppo. After all, it wants to solidify its presence in Europe. The company may use the space to push the marketing for the Oppo Find X5 series, and Oppo Reno 8 series. We may also see advertisements mentioning the MariSillicon X NPU. As well as the company’s camera and charging innovations. Obviously, the partnership may be a good stage for a new variant of the Oppo Find X5. As per the rumors, there is one coming with the Snapdragon 8+ Gen 1. Last but not least, the partnership will certainly bring UEFA-themed edition smartphones. A new Oppo Find X5 with a UEFA Champions League theme won’t be a big surprise.

This partnership may also be good once Oppo decides to bring its foldable N series to global markets.

Next An iOS 15 jailbreak tool could be around the corner

Oppo A77 4G smartphone launched with a dual 50MP camera