Today, Chen Jin, general manager of Lenovo’s China mobile phone revealed the Moto X30 Pro, which is Motorola’s annual flagship to be released on August 2. According to reports, the Moto X30 Pro will be the world’s first 200MP smartphone. This device will use a Samsung HP1 sensor and the size of this sensor reaches 1/1.22 inches. The target model of this smartphone is the Xiaomi 12S which uses a Sony IMX707, with a 1/1.28-inch sensor. 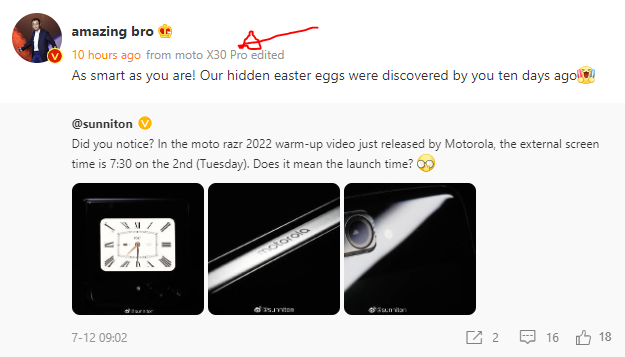 In addition to the large sensor, another advantage of this sensor is its high pixels. This means that the device will have a strong resolution. When shooting the same scene, the high-resolution photo will have very high resolution and richer details. Previously, Chen Jin had posted a sample image taken with the Moto X30 Pro. The size of this image exceeds 13MB, and the details of the picture were excellent.

However, the Moto X30 Pro has the capacity to compress the image. After compression, it will lose some details and the size will be significantly lower. Chen Jin points out that the 200-megapixel Moto X30 Pro has added a new self-developed intelligent high-resolution mode. This sensor can also output 50-megapixel high-precision images in automatic mode.

In terms of core configuration, the X30 Pro will come with a Qualcomm Snapdragon 8+ Gen 1 flagship processor. This device will also have a 50-megapixel ultra-wide-angle camera and a 12-megapixel sub-camera (not a telephoto). The screen size is 6.67 inches, the resolution is FHD+, and the refresh rate is 144Hz. Under the hood, this smartphone will come with a decent battery capacity. However, at the moment, there is no information regarding the battery size of this smartphone. Nevertheless, there are reports that this device will support a  125W super flash charge. This is one of the fastest smartphone charging capacities in the industry.