Online sources are reporting that the Chinese company Vivo is preparing to release a new mid-range Y-series smartphone. The device has the codename V2250 and will debut in the commercial market under the name Vivo Y35.

Information about the device has already appeared in the Geekbench benchmark, as well as in the databases of a number of regulators, in particular, the Eurasian Economic Commission (EEC). Thus, the smartphone is in preparation for release, including on the European market.

Geekbench data says it’s using an octa-core Qualcomm processor. Network sources specify that the “heart” of the device will be the Snapdragon 680 chip, which contains the Kryo 265 cores with a clock speed of up to 2.4 GHz, the Adreno 610 graphics accelerator and the Snapdragon X11 LTE modem. The amount of RAM is 4 GB.

According to rumors, the Vivo Y35 model will come with a 6.5″ IPS display and Full HD + resolution. A triple camera will allegedly be located on the back, but its characteristics are not disclosed. 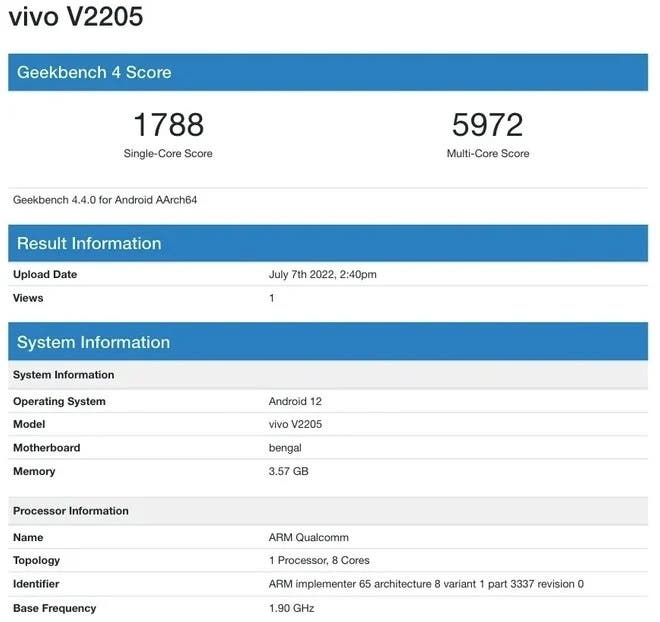 Vivo will soon launch the X90 Mini, according to preliminary data, this model will receive a 5.88-inch OLED screen with Full HD + resolution and a frame rate of 120 Hz. The basis of the hardware platform will be the MediaTek Dimensity 8200 SoC when it comes out. According to rumors, it will happen by the end of the year.

Previous All you need to know about the Google Pixel 6a before buying, the pros and cons.