Xiaomi is not done with the H2 2022 flagship schedule. After releasing the Xiaomi 12S series in China, the company is preparing new Redmi contenders in the flagship range. The brand is gearing up to introduce a new K50 series smartphone. It will be named either Redmi K50 Ultra or S Pro. The device will sit at the top of the Redmi series with a Qualcomm Snapdragon 8+ Gen 1 SoC. Ahead of the phone’s launch, Redmi General Manager, Lu Weibing keeps teasing the device.

Redmi K50 Ultra will be the Ultimate Masterpiece in K50 Universe

According to Redmi GM, the K50 Ultra will bring a “K50 Universe Ultimate Masterpiece (machine-translated)”. The device will pack the Qualcomm Snapdragon 8+ Gen 1 SoC and will reach the market in August. The executive also published some cryptic teasers on Weibo. The post shows two smartphones, one is the Xiaomi 12S Ultra, and the other one possibly is the new Ultra variant.

As per the tipster Digital Chat Station, the Ultra variant or “Redmi K50 Universe” will bring the Qualcomm Snapdragon 8+ Gen 1 SoC. The device will really launch in August. He also mentions an impressive Redmi Note series smartphone coming later. 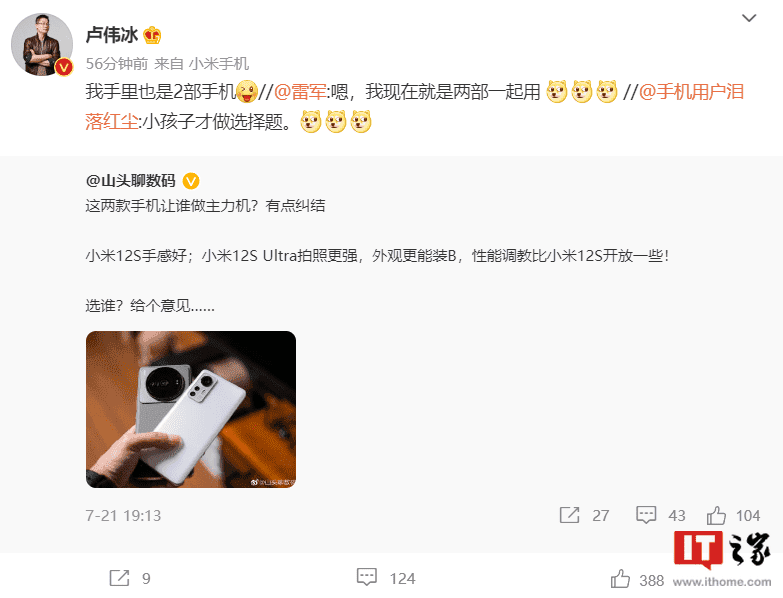 As per the report, the Redmi K50 Ultra already got its 3C certification. The device carries model number 22081212C and will bring 120 W fast charging. This charging standard currently is the best offering on Xiaomi’s commercially available smartphones.

Interestingly, there were rumors also suggesting a 100 W fast-charging large battery. The capacity is unclear, but we could even bet on a 5,000 mAh battery. So far, smartphone OEMs are having a hard time trying to pair ultra-fast charging with large batteries. After all, the dual-cell tech is necessary to withstand this charging speed. However, Xiaomi already proved it’s capable of overcoming certain challenges.  According to the rumors, the Redmi K50 Ultra will hit China with this moniker. However, across overseas markets, it will carry Xiaomi 12T Pro.

The K50i was the latest entry in the K50 series for the Indian market. However, it’s basically a Redmi Note 11T Pro+ with a different moniker.

Next Galaxy Watch 5 Pro will offer 3 days of autonomy: a record for Wear OS