Elon Musk first talked about integrating Steam into Tesla vehicles in February. Now he announces the arrival of the gaming platform in August. In the initial stages, Steam will work in the form of a demo. According to Elon Musk’s tweet, his team is making great progress in integrating Steam into Tesla’s vehicle system. We should expect a demo application already next month. Of course, Steam will arrive at Tesla cars next month if there are no problems that could cause a delay. 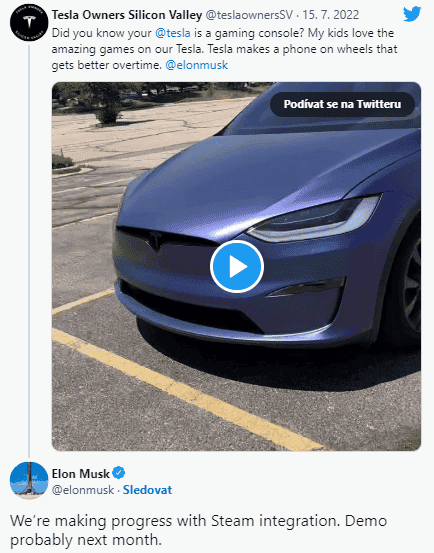 Steam could, with its giant library of games, expand the existing one found in Tesla. At the moment, it is hidden under the Tesla Arcade service. It includes, for example, the action-packed Cuphead or the racing game Beach Buggy Racing 2. These games can be played directly from the steering wheel of the car.

Tesla cars had issues with games before

Tesla had a problem with games last year. At first, the automaker allowed gaming only when the car was parked. Later, Tesla allowed gaming while driving, which caused a wave of concern. After loud criticism from the US National Highway Traffic Safety Administration, Tesla reverted to its original state. So the driver and passengers can save time in the Tesla only in the parking lot.

However, the relevance of this feature is still under debate. If the car is stationary, then playing the game will be consuming battery and other resources. At the same time, it is highly dangerous to permit gaming while driving. For many folks, there is really no point embedding a game into Tesla cars. However, Tesla is always seeking to improve the capacity and ability of its cars. Nevertheless, it is important to note that playing Steam games on Tesla cars will come with some restrictions. As of now, we can not tell the terms and conditions that will arrive with the gaming console.

Read Also:  Tesla is accused of lying about the Autopilot performance
Source/VIA :
indian-tv