Strategy Analytics has assessed the balance of power in the global smartphone market in the second quarter of this year. Shipments of smartphone devices have been declining for the fourth quarter in a row.

So, from April to June inclusive, a total of about 291 million smartphones were in sale. The year-on-year drop was approximately 7%. In the second quarter of 2021, shipments were 314 million units.

Also, the market leader is Samsung with 62.5 million sold smartphones and a share of approximately 21.5%. We note that the South Korean giant showed the best dynamics in the top five: sales rose by 9.5% year on year.

In addition, in second place is Apple, which shipped 47.5 million iPhones in three months, accounting for 16.3% of the industry. Strategy Analytics emphasizes that Apple’s share has reached a record high (for the second quarter of the year) over the past ten years. Sales year on year rose by 3.3%.

Xiaomi closes the top three with 39.5 million shipped devices and 13.6% of the market. Sales of devices of this company for the year collapsed by 25.2%. The top five also included the Chinese Oppo and Vivo, the result of which was respectively 9.5% and 8.6%.

Apple’s share has reached a record high in Q2 2022

Join GizChina on Telegram
Read Also:  Why is the iPhone 14 series so popular - dominates the hot search 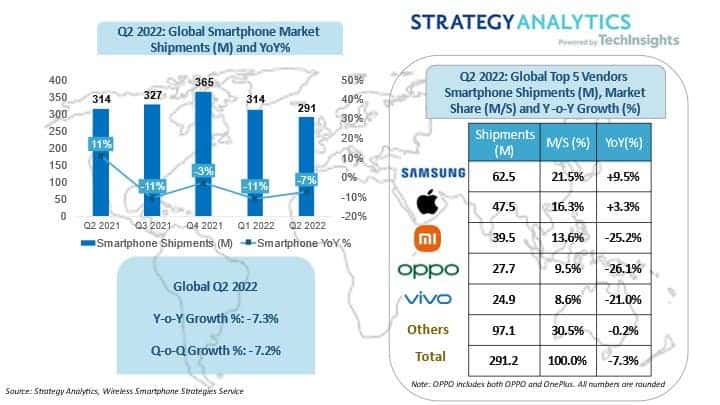 Woody Oh, Director at Strategy Analytics, added, “We estimate Samsung shipped 63 million smartphones and topped the global smartphone market with a healthy 22% share in Q2 2022. It is the vendor’s highest second quarter performance by market share since 2020. Demand continued to remain strong for the newly launched flagship Galaxy S22 series, especially the higher-priced S22 Ultra model. Apple shipped 48 million iPhones worldwide, up +3% YoY, for 16% global marketshare in Q2 2022. This is the highest second quarter market share for Apple over the past ten years; at the expense of leading Chinese brands who are hampered by the sluggish performance in both home and overseas market. Apple had a good quarter, led by iPhone 13 series which continued to ramp up volumes in US, China and other key markets.”