“NEWS: @SpaceX  has launched a Starlink Travel Case for $250. “Features include a hard shell case with zipper, backpack straps, and handles on the top and side. Fits all items that came in your Starlink Kit including the router, base, and cables”. 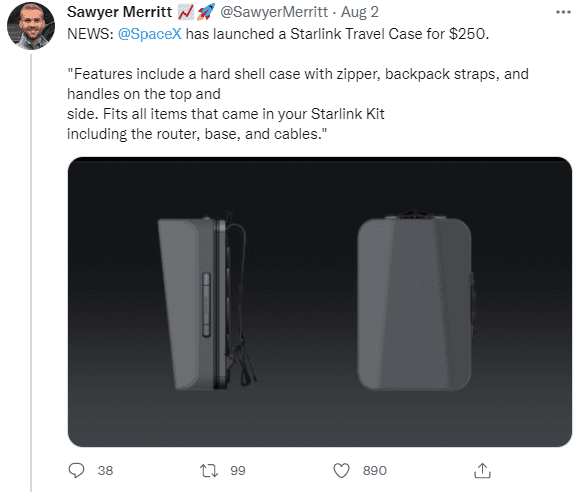 Visually, this Starlink suitcase features a zippered hard shell with backpack straps and top and side handles for added convenience. According to the official introduction, this suitcase is suitable for RV travel. It allows users to use Starlink’s network services anytime and anywhere during the journey. The suitcase can hold Starlink’s kits, including routers, docks, and cables. It is worth mentioning that this suitcase is only compatible with the new rectangular star chain antenna, not the original circular antenna.

SpaceX emphasized that the work of the astronomy community is not only important but will continue to work with them to reduce the impact on all satellite operations. “As a space exploration company, SpaceX is a staunch supporter of the astronomy and scientific communities.”

According to reports, SpaceX has strengthened the mirror design on its Starlink satellites to avoid diffuse reflection of light. SpaceX also points out that not all materials are highly reflective, and some can absorb or make reflected light less bright. In addition, SpaceX has also used designs such as sun visors and radio frequency transparent mirror films to reduce the problem of sunlight scattering.

For the first generation of satellites, SpaceX also developed sun visors specifically. According to reports, they are made of a material that is invisible to radio frequencies specially developed by engineers. In addition to this, SpaceX has also developed RF clear mirror films as an alternative to sun visors. The film scatters most of the sunlight away from the earth. SpaceX says it has been improving its mirror coatings to reduce the amount of light reflected back to Earth.

It is worth mentioning that compared to the first generation of satellites, SpaceX has also improved the support material between its batteries. Simply put, change the white material to dark red material. The downside is that dimming the material increases the temperature of the solar array, which reduces performance. SpaceX notes that its second-generation satellites will add more capacity to the Starlink network; supporting more users in more places. The second-generation satellite will use three advanced brightness technologies, such as dielectric mirror films, which can reduce the brightness by 90 percent. SpaceX has been consistently improving since its inception in 2002. The company has a couple of satellites and it already provides uninterrupted internet services in many parts of the world.

SpaceX rocket crashes in transit and hits a bridge