According to reports, NASA’s $10 billion James Webb Space Telescope (JWST) captured a stellar explosion more than 3 million years ago. The same galaxy was observed by the Hubble Space Telescope in 2011, but the supernova was not found. The galaxy in which the supernova was located is about 3 billion light-years from Earth, and its bright beam was captured by the newly operational James  Webb Telescope. This is the first time the telescope has observed the explosion of a dying star. 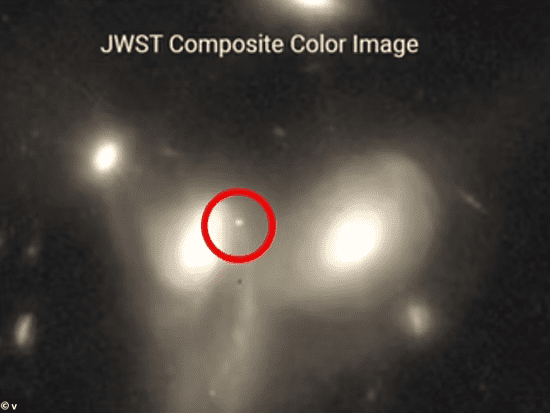 A supernova is a violent explosion that a star experiences as it nears the end of its evolution. It is also the “last revelry” when it runs out of fuel. Running out of fuel causes pressure to drop, during which the stellar material expands to a size of at least five times the mass of the sun—about 333,000 times the mass of Earth—before it explodes violently. The explosion releases huge amounts of debris and particles.

This stellar explosion occurred in the galaxy SDSS.J141930.11+5251593. Images from the James Webb Telescope show one object dimming over a 5-day time span, a line that suggests the existence of a supernova. Mike Engelzer of the Space Telescope Science Institute (STScI) claims the James Webb telescope is not designed to detect new transients, so the discovery is particularly exciting.

The potential supernova was captured by the Near-Infrared Camera (NIRCam) on the Webb Telescope. This covers the spectrum from the visible edge (0.6 micrometers) to near-infrared light (5 micrometers) and can be used to detect the origin of the earliest stars and galaxies of light. NIRCam is equipped with a coronagraph, an instrument that allows astronomers to photograph centrally bright objects — such as star systems — with very low light around them or stellar explosion events such as supernovae.

Engelzel points out that the James Webb telescope happens to be detecting the SDSS.J141930.11+5251593 galaxy at the time. It was very lucky to photograph this supernova. The dying star is a small bright spot in the image, not present in the 2011 Hubble Space Telescope image of the galaxy. Engelzel and his team used software that can spot differences in pictures that cause bright spots.

After just one week of operation, the James Webb telescope has justified its enormous expense. On July 12, the Webb Telescope team released the first official images of deep space; a week later, scientists announced that they had discovered a 13.5-billion-year-old galaxy, the oldest galaxy in the universe currently visible to humans. Known as GLASS-z13 (GN-z13), the galaxy formed just 300 million years after the Big Bang, which occurred 13.8 billion years ago. The previous record holder, GN-z11, discovered by Hubble in 2015, dates back 400 million years after the universe was born. The James Webb Telescope used the Near Infrared Camera (NIRCam) to capture what the GN-z13 galaxy looks like. While probing the region of the GN-z13 galaxy, the Webb telescope also discovers the GN-z11 galaxy. 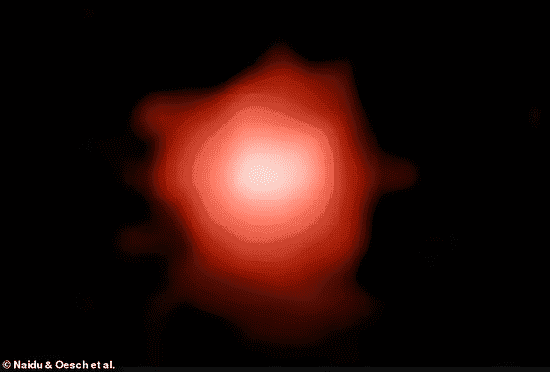 How to interpret the telescope image of Stephen’s Quintet?

Among the first images released by the James Webb Telescope, the most striking is that of Stephan’s Quintet. This group of galaxies was first discovered in the constellation Pegasus by astronomer Édouard Stephan in 1877. This gorgeous collection of galaxies is the initial form of the so-called “dense galaxy group”. In this scenario, the four galaxies are very closely related. These galaxies collide and gravitationally interact with each other, and are likely to merge into a huge galaxy. Of all the compact groups of galaxies, Stephen’s Quintet is the most studied. It also provides important clues to how gas, stars, and a bunch of dark matter grew and evolve.

In the Webb image, the four galaxies on the right are tightly and powerfully connected by gravity. Here, billions of stars are torn apart into giant streamers. Interestingly, it is these interactions that slow the collapse of Stephen’s quintet into a single giant galaxy. This transition currently appears to be in balance with individual galaxies. As with any good galaxy image, the Webb Telescope’s Stephen Quintet image can decipher a myriad of information. However, on a grander scale, we can identify seven bright spots that help us understand these wonderful universe scenes. 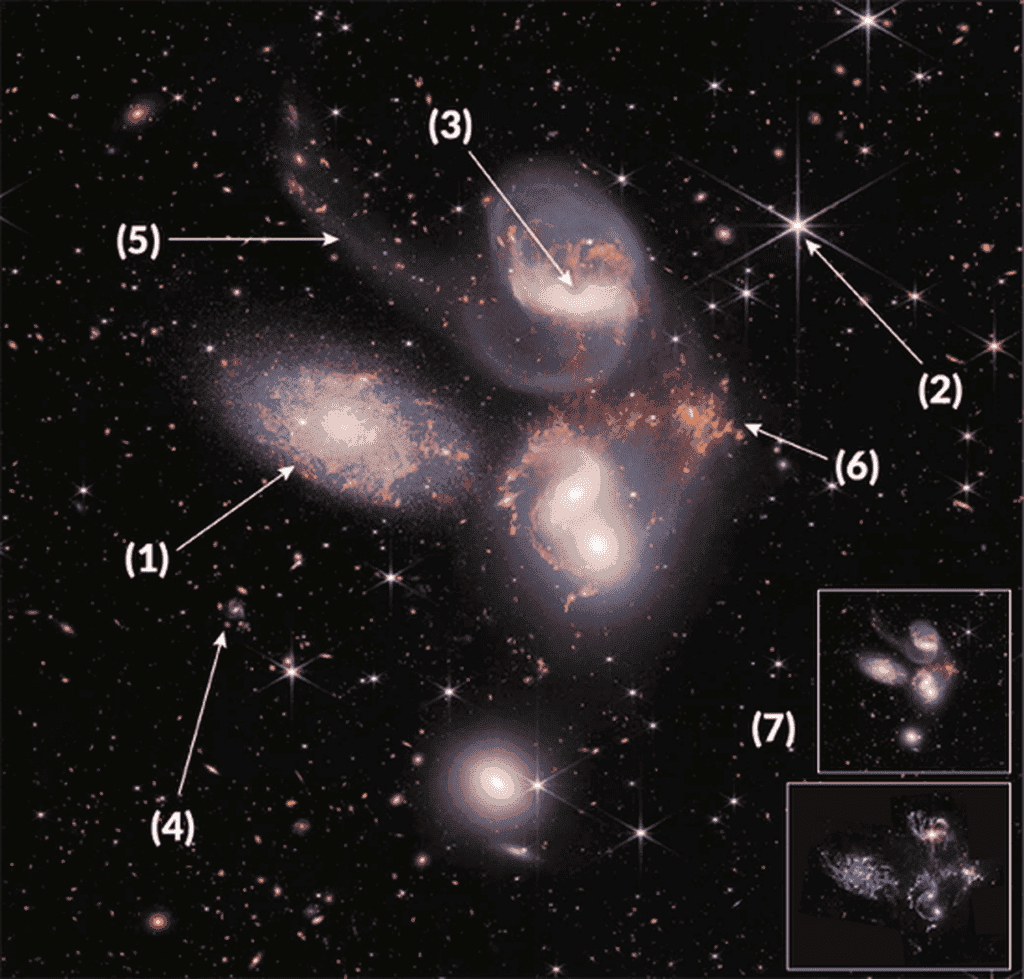 Bright spots that help us understand these wonderful universe scenes

(1) This galaxy (NGC 7320) is only 40 million light-years away from Earth and is the “interruptor” in the foreground. The other 4 galaxies are physically interconnected and about 290 million away from our solar system light years. Delicate fold textures are visible in Webb Telescope images of this closer galaxy

(2) The stars in the Milky Way are like shimmering decorations that forcefully squeeze into the foreground of the picture. Their pointed appearance is caused by light diffraction near the edges of Webb’s 18 hexagonal mirrors.

(3) The brightness of this bright light from the center of the galaxy NGC 7319 is equivalent to 40 million times that of the sun. The Webb telescope’s spectroscopic instruments were also able to detect the light from this flow of material. It also reveals signs of hot, and cold gas, and a coating of microscopic silica dust.

(4) In addition to the majestic Stephen’s Quintet, images of hundreds of other galaxies from more distant space-time “accidentally” fell into the Webb telescope’s lens. It fills the tiny cosmic wallpaper, proving the extraordinary sensitivity of the telescope. Galaxies containing hundreds of billions of other stars and worlds are there.

(5) Glowing tails containing billions of stars are stripped away from galaxies by tidal gravity. Perhaps these stars will form new dwarf galaxies on their own, or they may just be scattered into intergalactic space.

(6) As galaxies collide and intergalactic gas also collides within this complex. The gas heated to millions of degrees by the impact is not directly visible here, instead, the Webb telescope captures the messy glowing details of the post-collision.

(7) The main image is a composite of separate images taken with different infrared “colors” , showing the unique capabilities of the Webb telescope.