American billionaire, Elon Musk, is having a rough and pretty public battle with Social giant, Twitter. This is coming as a result of Musk’s decision to withdraw from the $44 billion purchase of the company. However, Twitter is not accepting Musk’s decision without a fight. Twitter has since taken Elon Musk and his immediate associates involved in the deal to court. Nevertheless, the company is not stopping there. Twitter is also dragging the social circle of the world’s richest man into a legal battle. In recent days, some of the biggest names in Silicon Valley have been critical of Twitter because they have all received court subpoenas.

Elon Musk and his friend Sacks

The subpoenas are a small part of a string of legal requests from Twitter after Musk tried to pull out of a $44 billion takeover deal. The subpoena comes from Wachtell, Lipton, Rosen & Katz LLP, a law firm representing Twitter’s lawsuit. The lawsuit is seeking to force Musk to complete a deal to buy Twitter.

David Sacks is an entrepreneur who helped Musk create PayPal. Speaking on a weekly podcast on Friday, he said Twitter’s subpoena was “harassment” and an “illegal investigation” of “sightly” and “retaliatory”.

Sacks said the subpoena was about 30 pages long and asked him to provide information on any communications he had with friends over the past six months, including documents related to his public tweets about Elon Musk’s acquisition.

“Now I know, one of Wachtel Lipton’s lawyers looked at my tweets and thought I was able to provide them with lots of documents and raw material, but let me tell you what the truth was,” Sachs said. Go shit and just riff off the tweet and that’s how this tweet ended up on the public record. There is no documentation or correspondence about my tweet, I guess what they want to know is that I somehow have ways of tweeting on behalf of someone or at someone’s request.”

Read Also:  Elon Musk disagrees with over 70% of Americans 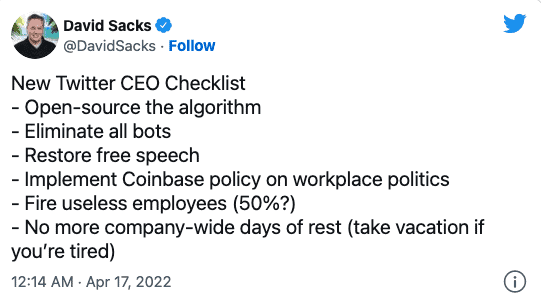 Twitter mentioned several of Sacks’ tweets in the subpoena, one of which was a to-do list for Twitter’s next CEO.

Sacks said on Friday that it was the first subpoena he had received in five years and that he planned to hire a lawyer to dismiss the legal request. He also tweeted a picture of a “middle finger” in response to a subpoena issued by Twitter.

Chamath Palihapitiya – Twitters subpoena is a complete waste of time 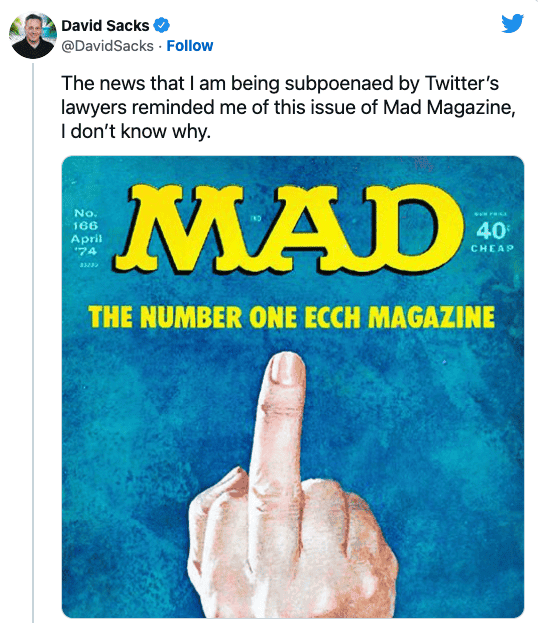 “The whole thing is a waste of time,” Palihapitiya said on the podcast. Palihapitiya and Sacks have been critical of Twitter’s bot issues and censorship in the past.

He also expressed concern about the number of bots (fake accounts) on Twitter. “As a user, the bot problem is very real,” he said. “I used to be a big Twitter user, and I thought Twitter had become very unusable in the last year.” Elon Musk has similar concerns.

Joe Lonsdale dealing with a subpoena for no reason

Last week, investor Joe Lonsdale, who attended the All-In summit with Musk in May, tweeted that the subpoena was a “huge harassing illegal investigation.”

Lonsdale was subpoenaed for unknown reasons 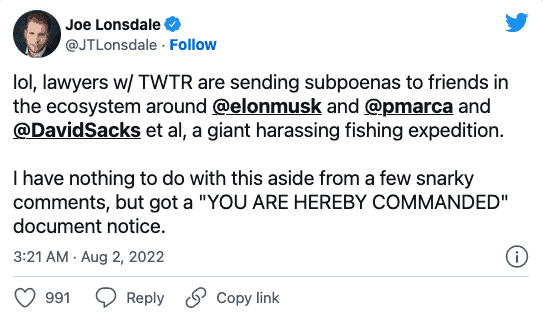 “I have nothing to do with this aside from a few snarky comments, but got a “YOU ARE HEREBY COMMANDED” document notice,” Lonsdale said.

These billionaires will probably respond to the subpoenas but there are no official comments from their spokespersons at the moment. Twitter may be facing the risk of a countersuit as these people are already considering the subpoenas an “embarrassment”.