Nowadays, Android and iOS are basically the two only alternatives for mobile smartphones, but we had a third option in the form of Windows Phone. In fact, Microsoft tried to build a third option for smartphone users but failed. The software was not very attractive for some users due to the lack of applications, especially some popular ones. Instagram, for example, took years to reach the platform and never left the Beta stage. Microsoft didn’t give users much time to say goodbye, it simply accepted its failure and moved on to make its services and apps available on Android and iOS. Anyway, some enthusiasts never give up on bringing Windows to an existing smartphone. A tech enthusiast posted a YouTube video that shows how he transformed the Samsung Galaxy Z Fold4 into a 2022 Windows Phone device.

This isn’t an advanced modification, after all, the Samsung Galaxy Z Fold4 is too new to get advanced mods. The tech geek Mark Spurrel combined two Android launchers and some Bixby Routines to achieve this Windows Phone experience. In essence, it is still running Android and Samsung’s One UI. The biggest advantage of this project is the versatility it brings to the Z Fold4 that looks like a large Windows tablet when unfolded. Interestingly, Samsung was one of the companies that tried to make Windows Phone viable launching some variants of its flagships with Microsoft’s software. After Windows Phone’s demise, the two remained partners with Microsoft offering some of its products natively on Samsung flagships. So, having this in mind, a Galaxy Z Fold4 with Windows Phone would make sense if the software were still around. 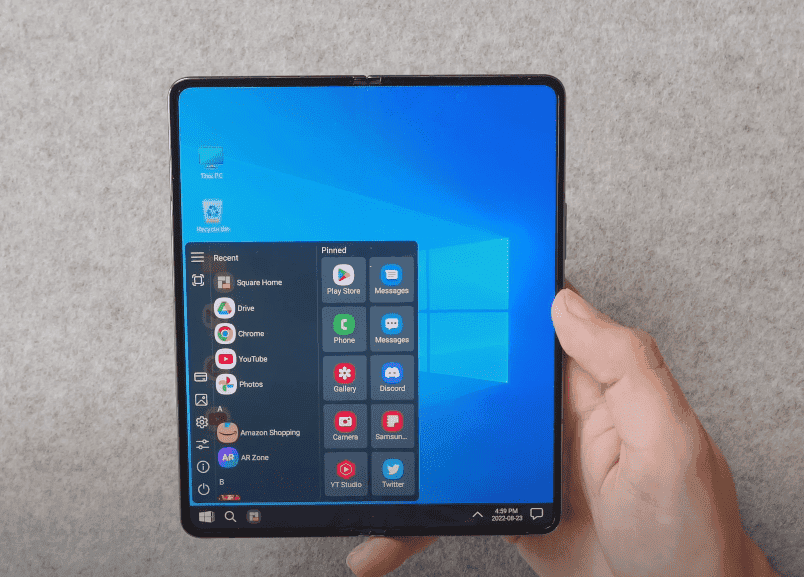 Interestingly, Mark’s project has the phone with the visual of Windows Phone tiles when closed. The tiles are customizable and match what you would expect on a typical Windows Phone. In addition to that, Suprrel was able to create quick access to other functions like the Camera. The transformed inner display of the Samsung Galaxy Z Fold4 brings a Windows 10 desktop experience. It boasts shortcuts and the start menu. Moreover, there are widgets for the clock, calendar, and other settings in the bottom left corner. Interestingly, there is a full panel for settings and notifications. 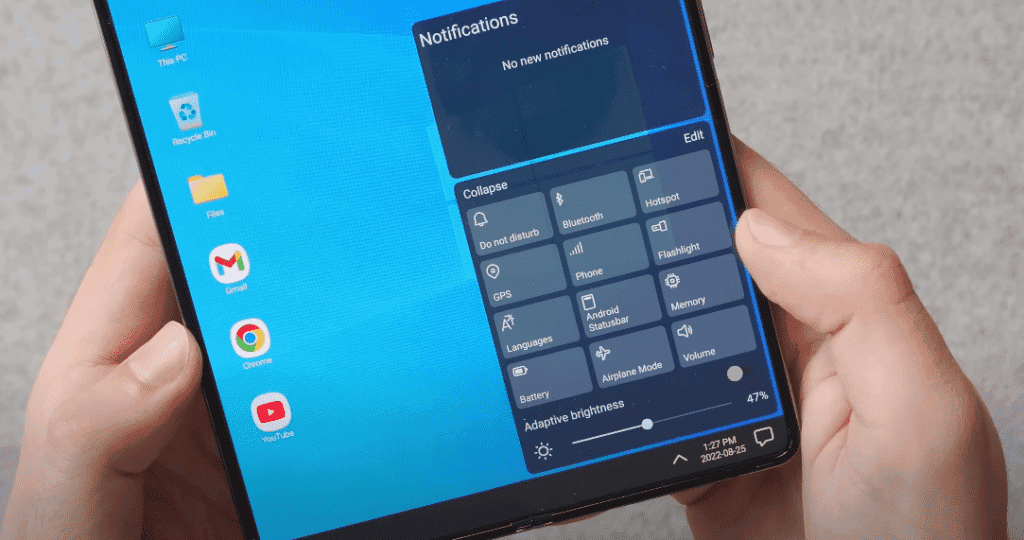 Worth noting, that not everything is perfect. According to the user, the phone constantly switches between launchers. Anyway, it’s a good starting point and the best concept we have of a Samsung foldable running Windows. He is still trying to improve the project.

If Windows Phone was still around, the Galaxy Z Fold 4 certainly would be the perfect candidate to get a variant with Microsoft’s dead software. The phone packs the Snapdragon 8+ Gen 1 SoC and has two gorgeous displays with a 120 Hz refresh rate. The design is way more durable than the previous generations, and the battery capacity is great for a foldable smartphone. The phone costs around $1,799, and while it’s expensive it’s much better than the previous generations’ pricing.

Windows Phone is gone, but Android is now available on Windows

Curiously, while Windows didn’t get much luck in the mobile scene, and didn’t get much help from Google, it may have a chance to succeed by offering Android apps on its platforms. Windows 11 currently has a native Android environment that can run some Android-based apps. Google also launched a new SDK that will allow developers to run Android apps on different platforms including Windows.

Previous How to revert Gmail to its classic design

Next Samsung will insist on AMD RDNA GPUs on Exynos chips