The smartphone market is very lucrative globally and very competitive in some markets. The top 3 smartphones in the world are China, India and the U.S. markets. While the U.S. is not competitive because it is an “Apple Market”, China and India are so competitive that many brands are now turning their attention away from these markets. One of the emerging markets that smartphone brands turn their attention to is the Philipines. A few hours ago, market research agency, IDC announced the Philippine smartphone market statistics for the second quarter of 2022. 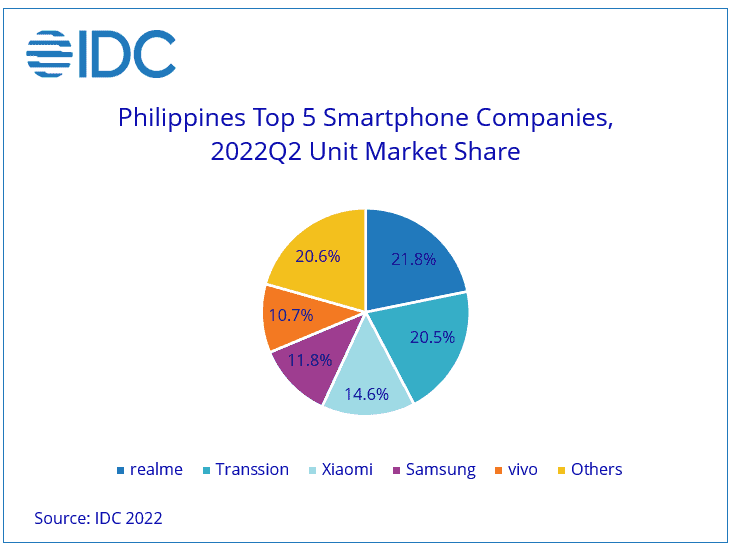 We can see from the list above that South Korean manufacturing giant, Samsung is the only non-Chinese brand in the top 5 list. 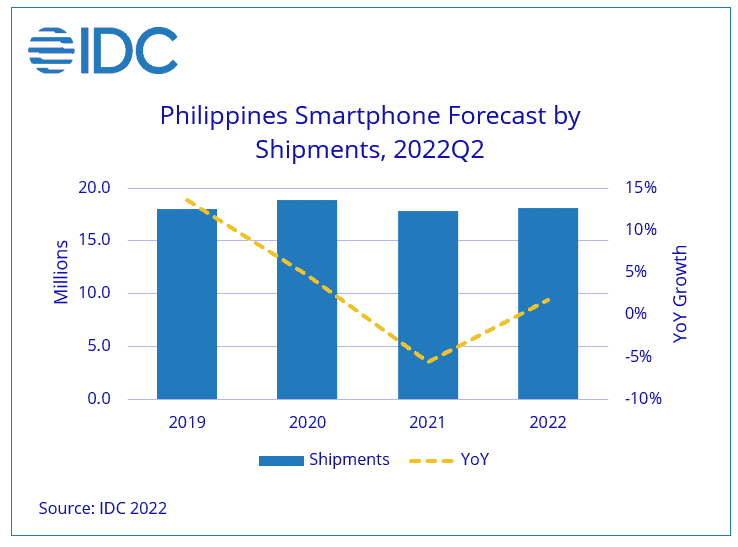 “Sub-$200 smartphone shipments increased significantly month-on-month as companies such as Transsion Holdings and Cherry Mobile launched new models in this segment, but remained low each year due to low demand and supply. Due to economic headwinds, consumer spending declined, as did shipments of models in higher price categories,” said Angela Medez, market analyst at IDC Philippines.

Realme holds the top spot for the sixth consecutive quarter and now accounts for 21.8% of the Philippine smartphone market, with a quarterly growth rate of 17.5%. Chinese manufacturer, Realme is doing pretty well in the smartphone market. Recall that while Xiaomi sits on top of the Indian market, Realme claims the second spot beating heavyweights like Samsung and Vivo. Thus, it is not a surprise that the company is doing well in the Philippines. Realme’s major focus is on the mid-range and entry-level segments. This most likely contributes to the company’s success in the Philippines market. Just like India, the Philippines is a market that prefers smartphones that are not so expensive. This is why expensive brands like Apple and Samsung will not do so well in this market.

In the Philippines, Transsion Holdings ranks second with shipments increasing by 152.2% year-on-year. Its month-on-month increase is about 13.5% and it occupies a 20.5% market share in the second quarter of 2022. Infinix’s retail expansion plans and marketing campaigns have tripled the brand year-over-year, accounting for nearly 60% of Transsion’s shipments. The Transsion model sells for an average of just $103, compared with $194 for the entire smartphone market.

Considering the Philippines market is one that tilts towards affordable smartphones, it is absolutely no surprise that Xiaomi is ranking high in the Philippines. Xiaomi’s share climbed to third place, accounting for 14.6% of the smartphone market. The Chinese manufacturer also records a year-on-year increase of 1.2% as well as a month-on-month increase of 12.1%. However, the overall average price of a unit of Xiaomi smartphone drops to $167. Nevertheless, Xiaomi has always been listed as the best-selling mobile phone on Shopee’s monthly sales list brand.

South Korean manufacturing giant, Samsung, is the largest smartphone brand in the world for a reason. Although Samsung is considered a flagship brand, the company has smartphones in all segments. The Galaxy S series is only a flagship series but the company also has the A series and other series that better suit the entry-level and mid-range markets. This is why Samsung has a place in the Philippines smartphone market.

Samsung drops to fourth place, down 23.0% quarter-on-quarter and 12.0% year-on-year. The company’s sales account for 11.8% of the smartphone market, with the A-series down 23.9% relative to the previous quarter. Comparing the sales performance with last year, Samsung’s 5G smartphone market share increased by 146.2%. This accounts for no less than 40% of Samsung’s total smartphone shipments.

The fifth brand in this top 5 list is another Chinese manufacturer, Vivo. The company makes a return to the top five after initially falling out a few quarters ago. Interestingly, Vivo’s return is quite grand with a 335.4% month-on-month increase in several new models (<$100) launched at different price points.

“With telco PLDT recently announcing plans to shut down its 3G network by 2023, we may see a rapid migration from feature phones or older smartphones to newer models that support 4G or 5G. Note that the number of 3G subscribers in the Philippines is pretty low, less than 5 per cent of total users,” Medez said.

The Philippines smartphone market is becoming increasingly lucrative. However, it may take some time for flagship brands to establish a market in the Philippines. As of now, the mid-range and entry-level markets are thriving.

Next Realme Flagship Watch 3 Pro To Launch On September 6