The iPhone 14 series was officially released sometime last week and this series has four models. The models include the iPhone 14, iPhone 14 Plus, iPhone 14 Pro and iPhone 14 Pro Max. Since the release of this new series, there has been a lot of enthusiasm from Apple fans. In fact, the enthusiasm this year is much higher than in previous years. Also, when the pre-sales for this series officially commenced, Apple fans flooded the website until it got stuck at some point. Of course, this first batch of users is those who have a “deep” pocket. Simply put, these are the users that are prepared to spend the cash. However, there are a large number of users who are waiting and watching. There are also those that are trying to take a decision, wondering whether to buy it?

Some users have already made up their minds to buy the iPhone 14 series. However, they are yet to take a decision on which is worth buying – the standard version or the Pro version. First of all, the iPhone 14 series has made a lot of breakthrough operations this time. But the so-called “breakthrough” can actually be good or bad and even determines whether it is worth the user’s money.

Here are some suggestions for users who may be confused

iPhone 14 Pro is worth recommending

The iPhone 14 Pro is undoubtedly worth recommending, and there is not much doubt about this. In the final analysis, the main point is that the iPhone 14 Pro has several relatively good upgrade points. The newly added “Smart Island” can be said to be the most stunning design on the iPhone 14 Pro. Apple cleverly turned the front opening area into an information preview center through animation effects, and this part of the area can also change with the information status, shape and area.

This technology is not new, it is actually Android-inspired. However, many Android manufacturers do not place much emphasis on the Smart Island function. Apple fans believe that Android brands do not focus on this feature because of lapses. However, this is not the case. On the surface, the “Smart Island” is a functional feature, but it is more a reflection of Apple’s strong ecology. In addition, it also shows that Apple copies Android.

Furthermore, the iPhone 14 Pro also has a powerful 48-megapixel main camera and a new A16 Bionic processor. In all respects, this is a model that surpasses its predecessors by a lot. At present, the starting price of this device in China is 7999 yuan ($1155). The most popular 256GB version costs 8899 yuan ($1285), which is 100 yuan ($14) more expensive than the previous generation.

iPhone 14 is not worth buying 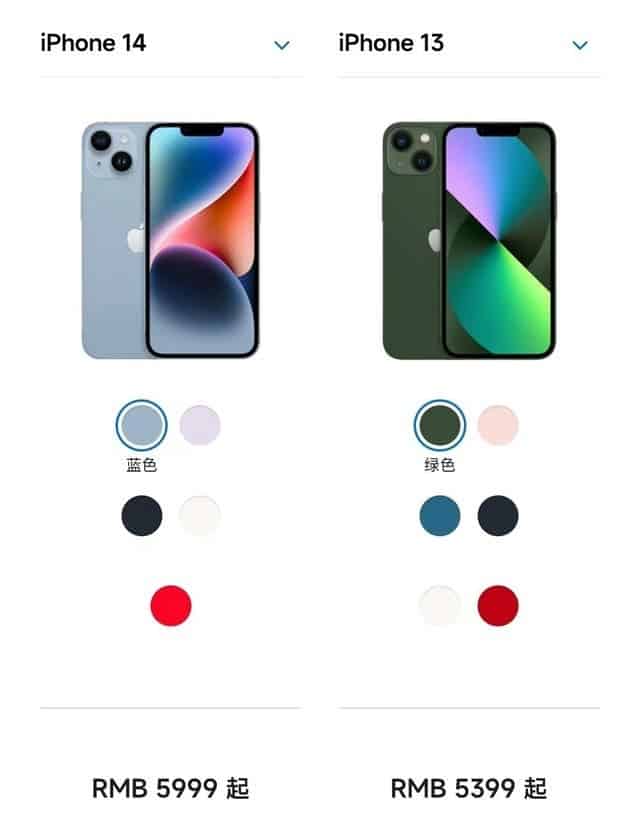 Looking at the price difference, the iPhone 13 is at least 600 yuan ($87) cheaper than the iPhone 14. The key is that there are not many upgrades on the iPhone 14, and there are even fewer selling points that can attract consumers.

From the perspective of core configuration, the two are not exactly the same, but they are highly similar, especially the key configuration parameters. In the core areas, both smartphones are very similar. For instance, looking at both smartphones, you can’t tell the difference if you are not a fanboy. This means that the design is technically the same. Also, both smartphones use the same processor, A15 Bionic SoC. This means that they have similar performance. In addition, the camera is similar and the iPhone 14 is only 1g lighter, we are sure no one can feel it.