In terms of technology, China is one of the most advanced regions in the world. The cost of producing electrolyzers in Chinese factories very cheap. It is only one-third of that of what it coats in the U.S. and Europe. This report is from a recent survey by market research firm, BloombergNEF. With this feat, China is now in the race for hydrogen production technologies. China may just have most of the key technologies for environmentally friendly hydrogen production. 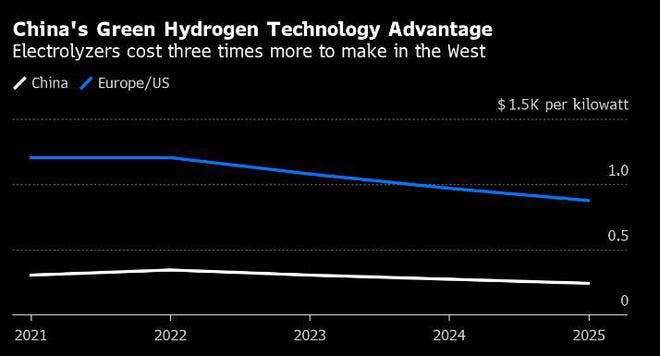 China has far better supply chains for components and raw materials. Also, hydrogen production in China is more efficient than other parts of the world. China is set to become the hub of clean hydrogen production globally. Nevertheless, foreign companies will have to worry about cost of transportation and installation.

However, even after transport and installation, alkaline electrolysis systems in China is still cheap. China can deliver the hydrogen production system to international customers at a much cheaper price. Of course, it will be much cheaper than those from Europe and the U.S. The report predicts that China will not have up to 30% of shares in Europe and U.S. by 2025. In three years, China’s alkaline electrolysis system sales share will surge. It will be catching up with Europe and the U.S. However, the expectation is that it will record a significant increase after that. Do you think Europe and the U.S. will cooperate with China for a clean hydrogen production?