It is not a secret that Samsung is already preparing the terrain for the Samsung Galaxy S23 series. In fact, the upcoming flagships, are rumored to come earlier than usual. So, we’re seeing a lot of leaks and rumors popping out everywhere. From design renders to specifications leaks, we assume that by the time of the launch, the company will not have much to surprise us. Today, the vanilla Galaxy S23 passed by the Geekbench showing the Snapdragon 8 Gen 2 muscles.

Samsung will still deploy variants with the Exynos chips. However, after the Exynos 2200 “fiasco”, everyone is looking at the Snapdragon 8 Gen 2 option. Today, the rumored US version of the Samsung Galaxy S23 with model number SM-S911U passed by Geekbench. The device passed by the benchmark website with the codename “Kalama” which likely refers to the next flagships chipset from Qualcomm, the Snapdragon 8 Gen 2. 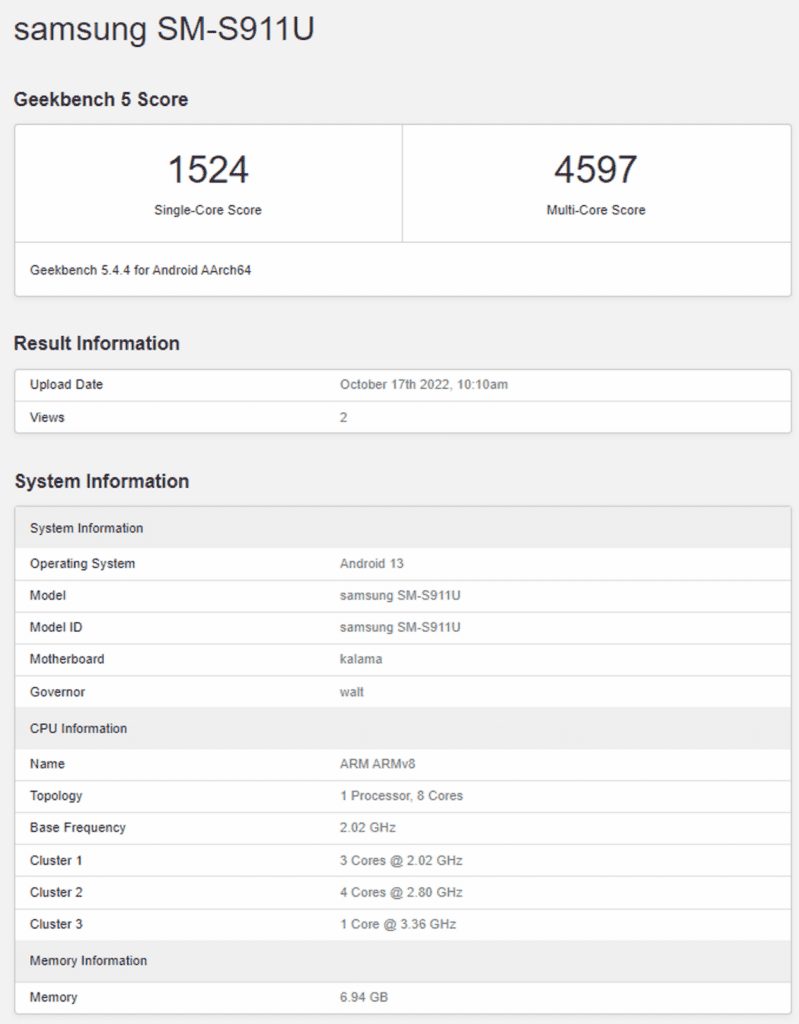 The Snapdragon 8 Gen 2 will bring a prime core with 3.36 GHz. According to leaks, it’s the Cortex-X3 core. There are also four mid-cores at 2.80 GHz, likely four ARM Cortex-A715 cores, and three small ARM Cortex-A710 cores at 2.02 GHz. Worth noting that these specs fall in line with the reports from the tipster Ice Universe. According to the tipster, the chipset will pack a 1 + 2 + 2 + 3 core configuration. This particular variant has 6.94 GB of RAM, which we assume stands for 8 GB of RAM.

The Samsung Galaxy S23 scores 1,524 points in the Single-Core and 4,597 points in the Multi-Core department. Of course, by the time of the release, the actual score may be slightly different. After all, this is an unfinished product, running on a processor that is yet to be revealed. Moreover, you need to digest benchmark scores with a pinch of salt. Especially from Samsung, which has been at the center of recent controversies and had some of its phones banned from Geekbench.

Anyway, the Galaxy S23 will have an Adreno 740 GPU. It no much of a surprise, but confirms the name of the Adreno 730’s successor. The phone will run Android 13, and we can expect it to launch with One UI 5.0. Yes, although Samsung will begin the rollout of stable One UI 5.0 now, we expect the upcoming flagships to arrive with a new incremental version, as usual.

Unfortunately, we’re yet to see the European version running Geekbench. To the disappointment of many users, that variant may bring the Exynos 2300 SoC. That SoC may bring Samsung’s newest 3nm manufacturing, and also a new iteration of AMD GPU.