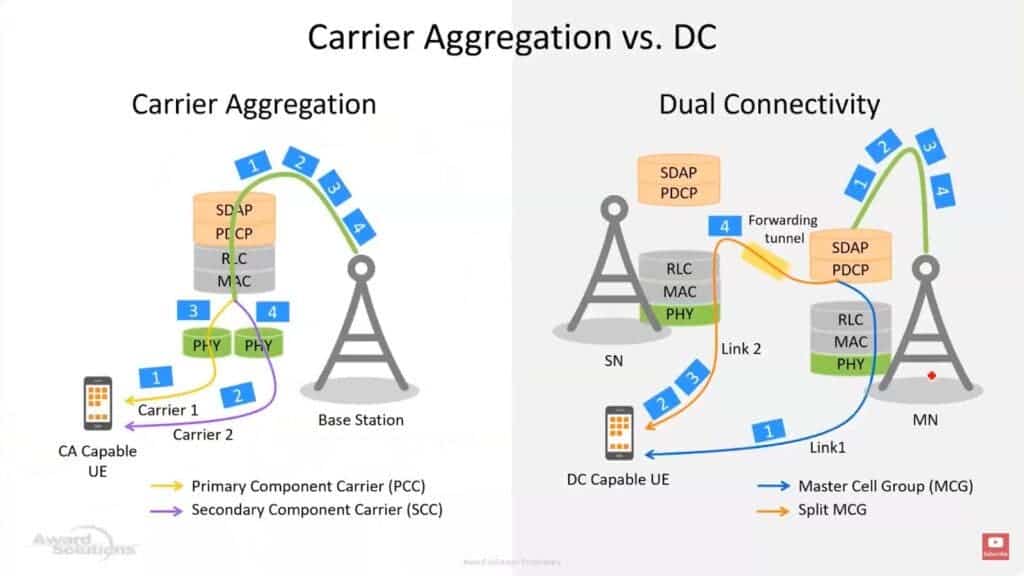 The architecture does not seem to be complex. However, there are a few issues with it. Are there any primary and secondary points between these two base stations? Can dual connectivity and carrier aggregation coexist? Which base station is the control plane on? How to split user plane data? Are there any requirements for the core network? These are multiple questions that require answers.

First of all, although these two base stations serve users, they do have primary and secondary points. There is a Master Node (or MN Node) with high status. Also, there is a Secondary Node (SN Node) with low status. The Master Node is also the primary node. When a smartphone needs 5G connection, it first connects to the primary node. Subsequently, it adds the secondary node. The master or primary node is also the “anchor point” and it interacts with the control plane of the core network.

Regardless of whether it is the primary node or the secondary node, they support multiple carriers internally for carrier aggregation. For the master node, once the internal carrier is aggregated, it is equivalent to packing multiple carriers into a group. We collectively call this group, the Master Cell Group (MCG). Likewise, multiple cells within the secondary node are called Secondary Cell Groups (SCGs).

The data bearer between the mobile phone and the master node is the MCG bearer. Likewise, the data bearer between the mobile phone and the secondary node is the SCG bearer. If the mobile phone has a bearer with the primary node and the secondary node at the same time, it is a split bearer. This indicates that the data is split at a certain node. The base station connects to the smartphone and core network simultaneously. This means that the field of view is naturally much wider than that of a smartphone. When the smartphone receives data, it knows the node from which it emanates.

Read Also:  These are the fastest 5G smartphones in 2022

How complex is 5G dual connectivity

As we said earlier, the smartphone may connect to a 4G and a 5G network simultaneously. However, determining whether the connection is a 4G core network or a 5G core network is complex. Also, determining whether the base station is a 4G base station or a 5G base station is not a simple task. To attempt to explain this, we can use the non-standalone (NSA) and standalone (SA) networks. We will use option 3x of the NSA architecture and option 2 of the SA architecture as examples to see how they both implement 5G dual connectivity.

For voice services, option 3x can only use 4G without offloading. This forms the MN-terminated MCG bearer; for data services, If the 5G base station does not perform offloading, it is the SN-terminated SCG bearer.

A good part of the details in this article is technical notes that an average smartphone user will not understand. However, the bottom line is that 5G dual connectivity means that a smartphone can connect to two base stations simultaneously. This will ensure that the smartphone has internet connectivity at all times. Data can be used from any of the networks.

Previous Do you really understand QR codes? Here are the details

These are the fastest 5G smartphones in 2022