Perhaps this is not a good deal for everyone, but I always missed the ability to send messages to myself on WhatsApp. This is not a good example of solitude, it’s just a cool feature that would allow me to store links, images, set memos, etc. One can say that there are dozens of apps that can be used for that, but I just wanted to have it on WhatsApp. This is something that Telegram had for years. Well, I’m not alone, and I can only believe that the multiple requests made by the WhatsApp Team consider this feature. Now, the ability to chat with yourself is available for WhatsApp users.

The Message Yourself feature has been available through the beta trim. After testing and implementation, the feature is now rolling out for all users on iOS and Android. The feature as the name implies has you sending messages to yourself. But to be clear, you can think of this as a private chat where you can write important notes, save links, upload documents and voice notes, etc. As I’ve said, the feature has been available on Telegram since its launch. It took a while, but it’s finally available for WhatsApp. The company has been testing this feature since October and now it’s ready for all users. 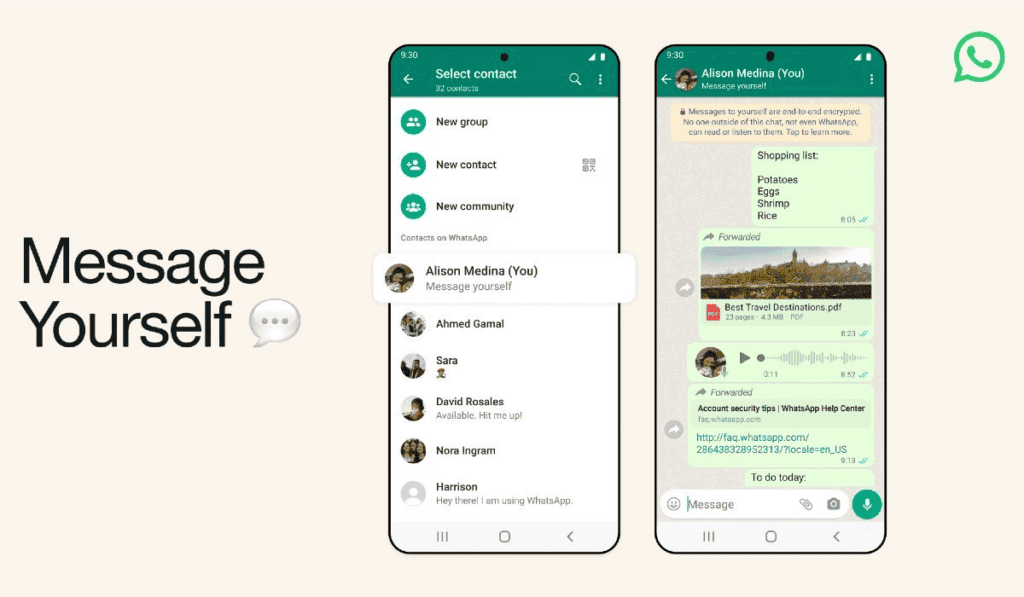 As I’ve said, there are a lot of users that will appreciate that feature. Some have worked their way to have a private chat on WhatsApp. The workaround was creating a group and then removing other members. After that, you would have the “group hub” only for you and your memos.

Although WhatsApp announces this is as “launched” it’s not yet available. We will have to wait and see if the company will roll out a new update for the app, or if it will come through a server-side update. WhatsApp is getting new features at a fast pace in 2022. According to Mark Zuckerberg, the messaging app and Facebook Messenger (now, only Messenger) will be the company’s focus for the next years.