So, the official OnePlus 11 renders have just surfaced on the internet. But this might not be your first look at the next flagship of OnePlus. We saw another leak in September. Those renders revealed an updated circular camera island, which featured three sensors. They also showed us that OnePlus is still sticking with Hasselblad branding.

However, the previous leak was nothing but a high-resolution CAD render. And those types of leaks about phones come out every now and then. So, no one could guarantee whether the new OnePlus 11 would have an updated camera module. Well, with this official leak, it’s confirmed! 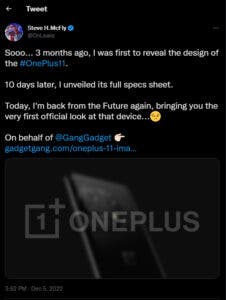 Is This The New OnePlus 11 Pro We Were Hoping For?

OnLeaks previously claimed that the next OnePlus would be called the ‘OnePlus 11 Pro.’ However, the OnePlus 11 renders that the leaker shared suggests that the brand might not use the ‘Pro’ brand for the next phone. Even though there might be a name change, the next OnePlus phone is still set to use the same design we got to see in the previous renders.

As you can see from the leaks, the new OnePlus 11 will come with an updated camera island. Yes, it is the same camera module we saw in the previous CAD render leak. That means you can definitely expect to see a circular camera island that flows towards the left edge. 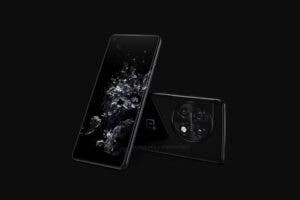 Regarding the number of cameras, the official leak shows us three sensors. These sensors are set to come with Hasselblad tuning, which the branding in the middle of the module suggests. And let’s not forget to mention that the camera module will also come with an LED flash.

OnePlus has officially confirmed that the new OnePlus 11 will boast Qualcomm Snapdragon 8 Gen 2 chip. And the company is yet to announce the remaining specs of the flagship. However, previous OnePlus 11 leaks  revealed that the device would come with a 6.7-inch QHD+ AMOLED panel, which will be 120 Hz.

Read Also:  OnePlus will Launch Ace 2 with a Special Chipset for Power Management 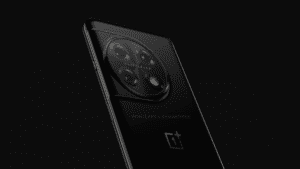 The leaks also suggested that the phone is set to come with a ceramic body, up to 256 GB UFS 4.0 storage, and 16 GB of RAM. What about the cameras? Well, from the previous and this OnePlus 11 render leaks, we got to know these:

That said, there is no word regarding the sensors the camera module will utilize. But judging the competition, the array could include a Sony IMX766. Yes, it is not the best sensor on the market right now. However, as it is a non “Pro” model, the sensor choice of OnePlus can be considered to be okay.

But that’s not all! Other leaks about hardware have revealed several key specifications. For example, the OnePlus 11 is rumored to support 100W wired fast charging. So, you can expect the phone to charge up exceptionally fast. The leaks also suggested an in-display fingerprint scanner, something we have been seeing in the last iterations of the lineup.

Additionally, recent leaks suggested that the phone will boast WiFi 6E and Bluetooth 5.2 chips. These two chips are in-line with the current competition. And they are pretty reliable.

When Will OnePlus 11 Launch?

Previous 5 mistakes you make when charging your smartphone