Chinese manufacturing giant, Xiaomi, officially released its latest digital flagship series, Xiaomi 13 series last night. At launch, this series has two models, the standard Xiaomi 13 model and the Xiaomi 13 Pro model. The prices of these mobile phones have made the market wonder what their differences are. The Xiaomi 13 comes with a 3999 yuan ($573) starting price while the Xiaomi 13 Pro has a 4999 yuan ($717) starting price. This means that in terms of price, the difference is a whopping 1000 yuan ($143). So, what could be the differences between these mobile phones? 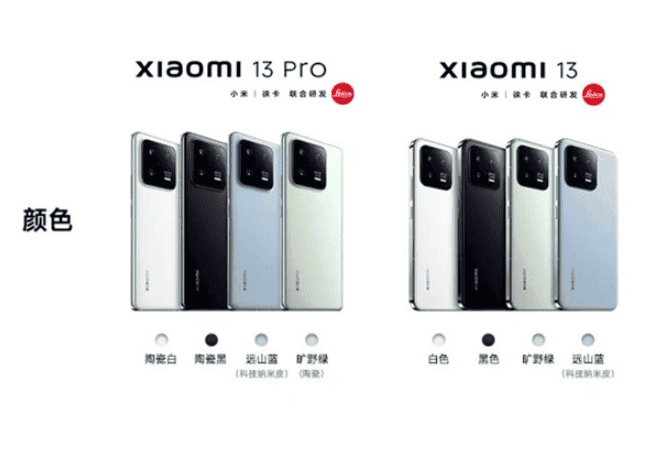 Similarities between Xiaomi 13 and 13 Pro

Before we look at the major differences between these devices, let us briefly talk about their similarities. As a flagship of the year, the core specs of these mobile phones are roughly the same. Both mobile phones come with the same SoC. They both use the new Snapdragon 8 Gen 2 flagship processor. This chip supports a top version of LPDDR5X and UFS 4.0 + FBO refresh storage. These devices also come with a 4642mm² super large VC liquid cooling. This is a cooling system for gaming mobile phones and they also support the IP68 waterproof function. On the front, both smartphones use a 32MP ultra-clear lens for selfies.

Differences between Xiaomi 13 and 13 Pro

From the official specs of these mobile phones, the standard and Pro versions of the Xiaomi 13 differ in four major aspects. The three aspects are While the display of both products uses the same E6 material with a peak brightness of 1900nit, the difference is that the standard model has an ultra-narrow bezel 1080P resolution straight screen. However, the Pro model uses a 2K resolution curved screen that supports LTPO and ultra-dynamic display.

In terms of the material of the back shell, the Xiaomi 13 (glass rear) has four regular colours including black, white, green and a nanotechnology leather model (sky blue). The Pro model uses a ceramic back shell with white, black and field green and a nanotechnology leather (sky Blue) version. The weight and thickness of the two phones are also different. Generally speaking, the Xiaomi 13 Pro is heavier and thicker than the standard model. The camera department of these mobile phones is also quite different. While the front camera is the same, the rear is not. On the rear, the Xiaomi 13 comes with a 50MP Leica triple camera setup. In addition to the 50MP main camera (Sony IMX800), there is also a 12MP ultra-wide-angle lens and a 10MP telephoto lens.

The three Leica cameras on the rear of the Xiaomi 13 Pro are all the main camera specifications. The main camera (Sony IMX989) has a one-inch super outsole, and also has a 50MP floating telephoto lens and a 50-megapixel ultra-wide-angle lens. The Xiaomi 13 series is currently sold out online. However, the two new models will have their first official sales on December 14th. As for the price, both models have four versions. The versions and their prices are

Do you think the almost $150 price difference for these mobile phones is worth it? Let us know your thoughts in the comment section below

Micron Technology announced today that its LPDDR5X mobile memory has been officially installed in Xiaomi’s latest flagship mobile phone, the Xiaomi 13 series. It will be the first device in the world to adopt LPDDR5X, with a peak rate of 8.533 Gb/s. Micron said that the company’s latest version, LPDDR5X, is designed for high-end and flagship phones, and its peak rate is 33% higher than that of the previous generation of LPDDR5. Compared with the 7.5 Gb/s rates achieved last fall, this version of LPDDR5X has further improved the rate. In November last year, Micron sampled and verified mobile memory LPDDR5X based on the industry’s first 1α (1-alpha) process node. Prior to this, Micron also introduced LPDDR5, LPDDR4X based on 1α node, UFS 3.1 based on 176-layer NAND and uMCP5 solutions.

Next Android 13 is now rolling out to these Sony flagships