Nowadays, we have a lot of smartphones breaking the 150W charging barrier, but it’s curious to see that a mid-range phone is the one with the fastest charging standard. Xiaomi raised the bar with the launch of the Redmi Note 12 Explorer Edition featuring 210W charging support. The phone won’t stay the king of fast charging for much longer as Realme is preparing a 240W charging tech.

According to rumors, Realme’s upcoming Realme GT Neo 5 will feature 240W fast charging. So far the company is yet to disclose details about the GT Neo 5. However, the company will build the road with the reveal of its 240W charging tech. The new ground-breaking tech will be revealed on January 5 in China at 2:30 PM local time

Realme 240W charging will raise the bar even further

Realme did not confirm that we will see the new charging standard on January 5. However, the choice of words in the Weibo post and the poster make a direct reference to charging tech. Therefore, we expect the brand to introduce 240W charging. The brand is known for competing directly with Xiaomi in the cost-effective range, the Realme GT Neo 5 might be a very appealing flagship killer. 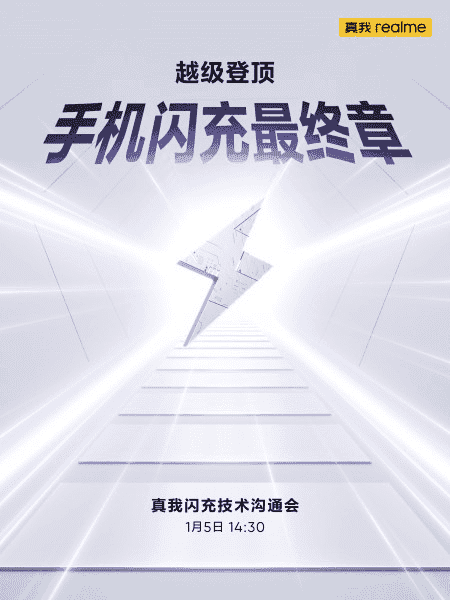 The new charging standard is a major jump for Realme. However, the company already is among the best ones in terms of charging. The Realme GT Neo 3 has one variant with 150W charging. In essence, we all know that this is based on Oppo’s SuperVOOC tech. Is the new 240W also another work from the “SuperVOOC lab experts”? If that is the case, we also expect new Oppo and OnePlus phones to come with this charging speed.

We expect the brand to share more teasers in the coming days.