In front of its main rival Apple, Samsung maintains its throne as the world’s top smartphone manufacturer. This trophy is valid through the third quarter of 2022, before Apple releases its newest flagships and surpasses all other brands in terms of global smartphone sales at the year’s end.

However, for the time being, the numbers that Counterpoint, a specialist in the study of the tech markets, has made accessible to us are those that ended on September 30. Surprisingly, not much has changed in the sector in the last six months. With an identical market share (21%) to the prior quarter, Samsung is still at the top.

The other four top smartphone producers in the world, Apple (16%), Xiaomi (13%), OPPO (10%), and Vivo (9%), also show this pattern. The remaining 31% of the market. However, is made up of heavyweights like Google or Sony or even a cutting-edge competitor like OnePlus and realme.

Even while Samsung’s shipments rose by 5% from the prior quarter. They still decreased by 8% annually to 64 million devices. 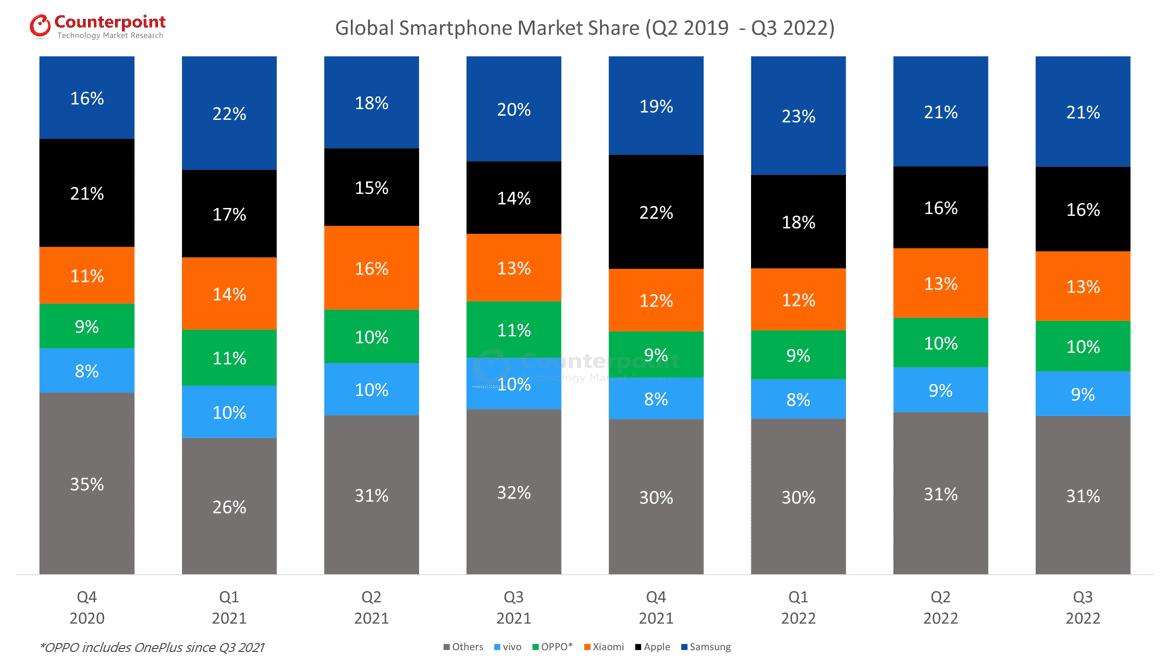 The sector as a whole presents a depressing face. Counterpoint data show that the third quarter of 2022 was the lowest for the smartphone industry since 2014. To reach a global volume of 301 million sold devices, it thus decreased by 12% over a year. And only increased by 2% compared to the second quarter.

The third quarter of 2022 saw an annual fall in shipments from the majority of the main suppliers. “Consumer confidence has been undermined by the escalation of the Russian war in Ukraine, ongoing Sino-US political mistrust and tensions, mounting inflationary pressures across regions, increased fear of recession, and weakening national currencies, hitting already weakened demand,” explained senior analyst Harmeet Singh Walia.

Even while there are still reasons to be optimistic, such as the robust demand for Samsung’s folding devices or the significant quarter that the iPhone 14 series will experience, the market should continue to be subdued. It will therefore undoubtedly fall short of last year’s levels and even the cap of 400 million units sold. Which took place prior to the COVID-19 epidemic.

Next OnePlus Ace 2 specifications tipped, here's what we know