Samsung will release the Galaxy S23 series flagship mobile phone on February 1st. However, in China, the time is the early hours of February 2nd. According to information from previous leaks, the Samsung Galaxy S23 series uses LPDDR5 memory. At first glance, it appears that this is also the same memory that the company uses in its older Galaxy S21 series and Galaxy S22 series. However, it is not. Popular Twitter tech blogger, @iceuniverse has confirmed that the Samsung Galaxy S23, Galaxy S23+ and Galaxy S23 Ultra will use faster LPDDR5X memory and UFS 4.0 storage. This series will also come with multiple RAM and storage combinations depending on the model 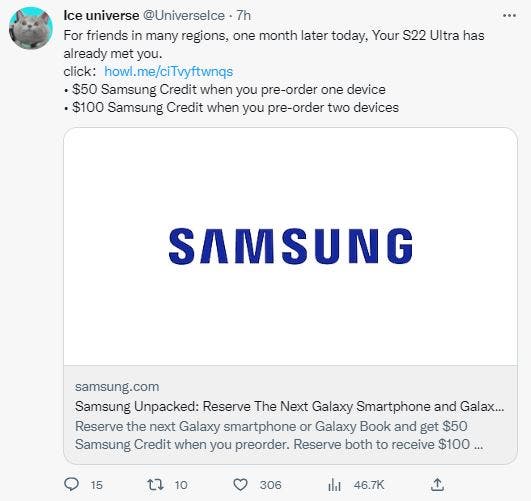 The following is the Samsung Galaxy S23 series storage configuration:

The use of the new gen. Snapdragon 8 Gen 2, new memory (LPDDR5X) and new storage (UFS 4.0) will bring huge performance improvements to the Samsung Galaxy S23 series. The improvement will likely reflect in the mobile phone startup speed, app and game launch, multitasking and game running aspects.

A few days ago, there were reports about the price of the Samsung Galaxy S23 series price. The report reveals that the cheapest model will cost $799 while the most expensive model will cost $1,499. Now, we have more information on the pricing of this device. This time, it is the prices of this series in Samsung’s home market, South Korea. A new leak reveals that the price of the Galaxy S23 series will not increase as much as previously rumoured. However, it will be slightly more expensive than the Galaxy S22 series. 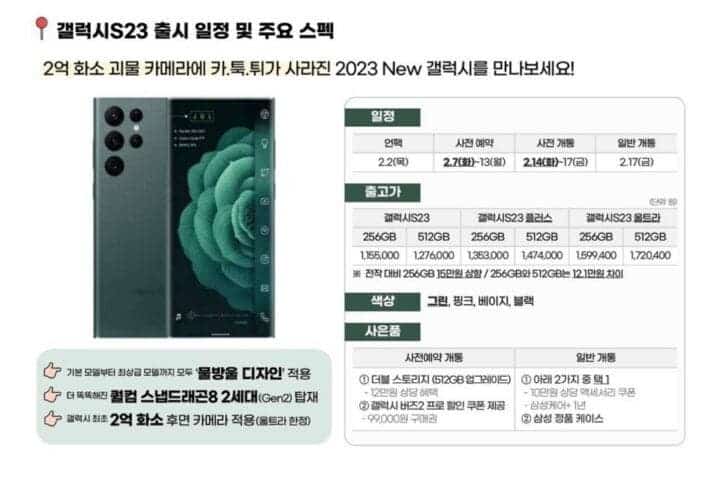 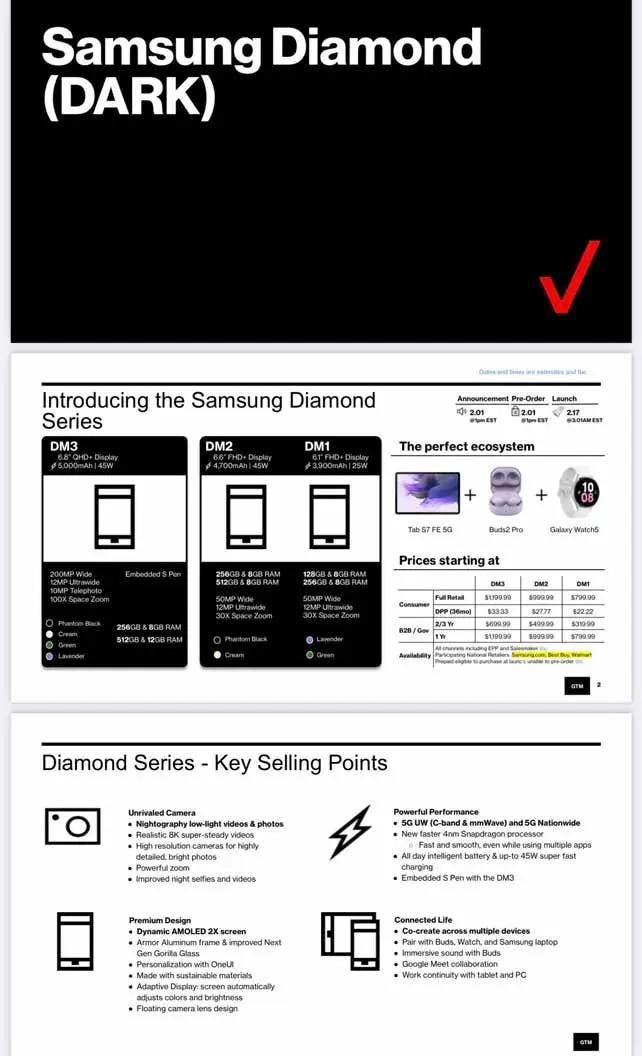 For reference, when the Samsung Galaxy S22, Galaxy S22 + and Galaxy S22 Ultra were released in South Korea last year, the prices were 999,900 won ($806), 1,199,000 won ($967) and 1,452,000 Won ($1,171). We can see that on the basic model, the price difference is not so big but it gets bigger as we move to the flagship models. The reality is that just about everything has become more expensive in recent years given the current economic climate. As far as Samsung is concerned, the higher price of the Galaxy S23 series in South Korea is due to higher component costs and higher inflation.

However, even with the Samsung Galaxy S23 launching at a higher price than the S22, this price increase may not happen across the board. In markets including South Korea and Australia, the Galaxy S23 lineup will likely be more expensive. However, leaked US market prices suggest that the upcoming flagship series will be priced the same as last year. In the United States, the starting price of the Galaxy S23 is expected to be $799.

For years, Samsung’s flagship mobile phones have been divided into two camps. In the U.S. and some major markets, Samsung Galaxy devices run Qualcomm Snapdragon chips. But in other markets, including Europe, they have long used Samsung’s own Exynos chips. However, there is a gap in performance between the Exynos chip and the Snapdragon chip. Samsung and Qualcomm signed an agreement last year. This deal was the first public hint that the rumors about the Galaxy S23 series using Snapdragon chips worldwide were true. Subsequently, there was more evidence at the time that some Galaxy S23 models were being used. It was found that a custom version of the Snapdragon 8 Gen 2 chip was used, with a higher frequency. According to documents reviewed by 9to5Google, the custom Snapdragon 8 Gen 2 used in Samsung’s Galaxy S23 devices will be called the “Qualcomm Snapdragon 8 Gen 2 chip for Galaxy”. The chip will have a CPU frequency of up to 3.36GHz while Qualcomm’s main version chip typically runs its main X3 core at 3.2GHz.

There is a performance gap between the regular SD8 Gen2 and the Samsung custom version. Samsung’s custom version of the Snapdragon 8 Gen 2 is expected to carry essentially the same feature set as the chip used in the OnePlus 11 and other Android flagship devices. However, it comes with some optimizations for Samsung mobile phones which will make them faster. There were also rumors that the chip was manufactured by Samsung’s foundry rather than TSMC. However, the original leaker of this report has since retracted his claim. This chip remains in TSMC’s domain but in conjunction with Samsung. The Samsung Galaxy S23 series is now open for pre-orders, and pre-orders can give you up to an additional $100.