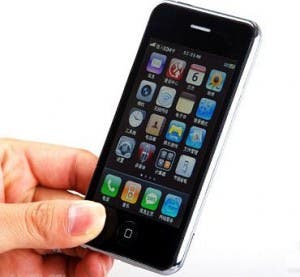 There used to be a time when people were happy to wait a year or so for Apple to release it’s latest and most fashionable creation. However our love affair with yearly minor upgrades and slight style tweaks has started to falter slightly.
Consumers in the West, started to take notice of the younger more open minded Android platform of phones, where as Chinese consumers went to the ShanZhai (clone) market.

The new wave of iPhone clones are unlike the original carbon copies of the past few years. The companies have made themselves names in the market and money to do some R&D, meaning this new generation of iPhone clones are not only better than previous incarnations, but also more feature rich, have better quality and make for a more exciting market to watch.

Image gallery and details after the jump!

Here we have the fruits of one companies labor, the iPod Touch inspired Air Phone. Measuring 8.5mm at it’s thickest, this copy makes the 3GS look like the once attractive, but now lardy older sister.
Ultimately, because of the width, certain functions have been omitted such as GPS and 3G, but all your multimedia needs are in place as are any business functionalities you may use and WIFI.

From the front there is very little to distinguish the Air Phone from the genuine iPhone, even the JAVA based O.S has been polished up a tad to give it more of an Apple feel. The back side of the Air is made from stainless steel, which should prove to be hard wearing. You’ll also find the SIM card slot here, a removable battery cover and a camera that supports video recording.
Our favorite feature though has to be the 880RMB ($130) price tag.
Read Also:  How to Recover Deleted Files on Apple iPhone/iPad

Obviously the 3GS is a much superior machine with a very impressive hardware and software, but if you just wanted a good looking phone to listen to a few mp3’s and browse the web at the local coffee shop the Air Phone would make an excellent choice.

Join our RSS to get more iPhone clone news the second it’s published.

Previous The First of Many iMac Clones

Next Chinese Architects Turn To Playstation For Inspiration