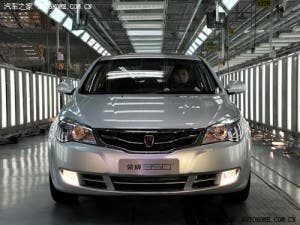 SAIC will soon be launching their second self developed Roewe branded car. The Roewe 350 as it is known is not only the second Roewe developed car to hit the Chinese roads, but it looks also to be the first car to use Google’s Android O.S for it’s on board navigation/media computer.

The 3G enabled Android powered navigation system will allow users to browse the web, chat to friends and business clients, send SMS messages and use other apps such as Google maps to check on traffic conditions and to create routes.

We’re unsure as to if this is just a concept or if the system will make it on to production cars this April when the Roewe 350 is launched, either way it can only be  good news for both Google and the ever growing Android user base.

Yes, it’s confirmed! The Roewe 350 is currently rolling off the production lines, complete with Android on board!

Subscribe to our feed for more updates on Android powered devices and other gadgets!

Next It's Nokia's Turn: Cloned E66