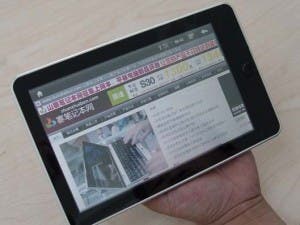 Since leaked photos of the iPad circulated the web last year, Shenzhen’s many electronics companies have been tripping up over themselves to bring out their version of the iPad. Not just something that looks similar to the real iPad, but a flat screened tablet device that will give Apples a genuine run for their money!
The current clones look the business, but are a little underpowered when compared to the iPad. Their 600Mhz processors are up to the task for most things, but tend to be choppy when playing HD movie content, and with games developers really pushing the boundaries of tablet gaming that 600Mhz clock speed will quickly become a real hindrance.
But, what about in a few months time? How about 1GHz clock speed from an ARM based Cortex A8 processor?
That’s what Rockchip and many other companies are planning, and claim that their next generation faster 1Ghz (iPad speed) tablet will be available by around September time.
What does this mean for us? A 1Ghz tablet from a big company like Rockchip and running open source O.S such as Google Android (as pictured here) will mean iPad speed without the ‘Apple Tax’. A similarly spec’d Shenzhen iPad clone could cost as little as half of the iPads retail price, and will probably offers features that Apple doesn’t such as built in SD card reader and USB plugs.

Join GizChina on Telegram
The model in the pictures is a prototype 7 inch model. It comes fully loaded with Android apps such as QQ, Gmail, YouTube and Facebook and supports SD card expansion, tilt to change view, but currently no 3G.
We’ll keep you posted on further developments, price details and launch dates!
Read Also:  Android smartphones are targeted by spyware that spies on conversations