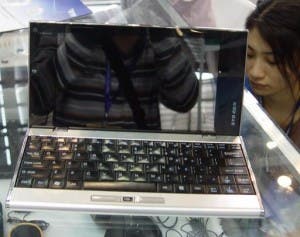 Not many people are familiar with BYD’s line of consumer electronics, but that set to change in 2010.
The automotive giant BYD are known for their blatant cloning of competitors cars, Honda and Toyota seem to be the favourites. So when sister company BYD electronics had it’s 10 inch netbook prototype on display in Shenzhen last week, commenters were quick to point out the similarities between it and Sony’s Vaio P.
Although similar in style and size the alloy bodied BYD ODM is different enough for us not to cry ‘copy’.
The exterior is a much classier looking, finger-print resisting, dull finish alloy rather than the Vaio P’s plastic. The keyboard on the BYD is also a little larger making typing more enjoyable and less like a form of hand contortion as it does on the pint sized Vaio. Also the built in web camera is on the left of a glossy 10 inch LCD screen rather than on the right where it’s found on Sony’s netbook.

Join GizChina on Telegram
There’s a distinct lack of cooling vents, ram access and hardrive access panels on the BYD, which could be due to it still being in the prototype stage, or does it mean BYD are following Apple down the fully sealed in battery root? If so this could mean impressive battery life from the little netbook something which has been lacking in other locally made netbook computers, which generally last only a few hours between charges!
Other points of interest are the SIM card slot for 3G connectivity, SD card reader, head phone and microphone jacks, plus a single USB.
Processing comes courtesy of a slightly higher spec’d Intel Atom Z530 cpu, with 1Gb of ram.
Pricing hasn’t been announced yet, but expect to pay around 2500-3000 RMB for the BYD ODM when it’s released later this year.

So is the ODM another example of BYD cloning, or is it a genuinely well designed self inspired little computer? Leave a comment below.

Next iPad Clones are Getting Supercharged 1Ghz Cores!

This new type of battery likes heat and never explodes