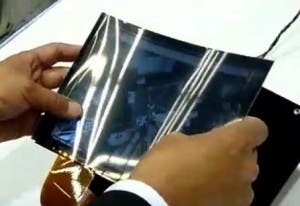 This mysterious bending screen recently appeared in the Tech channel ot China’s Youku video sharing site. The video shows what seems to be a prototype/pre production tablet screen that allow the user to zoom in and out by literally bending the screen!

The screen in the video seems to bend a fair amount without very little effort allowing the unknown o.s to zoom in on what seems to be Google Earth.

The idea seems very novel and might work well on a games device, but we can’t see the technology making it in to a tablet type device anytime soon for a number of reasons:

nice novelty though! You can watch the video after the jump.