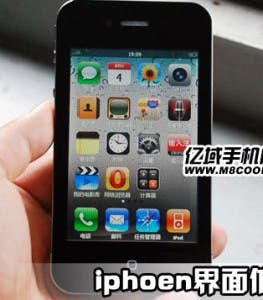 Many of the iPhone 4 clones we’ve seen have looked the part, even so far as to almost fooling us in to thinking they’re the real deal, but have really let us down in the O.S department, which usually turn out to be a rather clunky Java based affair.
This clone again has the looks, but also has a much more mature O.S inside running on a fairly snappy K3 460Mh/z CPU (a faster model clocked at 533Mh/z is planned in the works). Mature doesn’t automatically translate to good, but Window’s Mobile 6.5 ( the latest to date) is a far cry from those crappy Java models, and actually means there is a community of devs out there working on apps that can make this iPhone 4 clone much more personal and useful.
From a distance and even up close you would have difficulty tell this apart from the real iPhone 4, only the non standard 2.5mm headphone jack will give you any insight that things are not what they seem. There is also a small hole on the face of the body which we have yet to discover does what. It could either be a light sensor or possibly even a front facing camera.
The Window’s O.S has been modified to give the look and feel of Apple iOS and works as well as can be expected considering the lower quality non capacitive screen. Screen rotation for apps is available but must be turned on through the settings panel rather than happening automatically when the device is turned.

Join GizChina on Telegram
Overall this is one of the better clones on the market for the time being, but we hope the faster 533Mh/z model comes with an option to run either Android or even Windows 7.

Previous ‘Chinese Bullet Trains Are Modern and Safe! So There!’