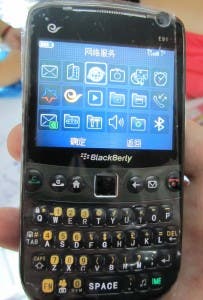 We headed to the local ‘Phone City’ this weekend and were lucky enough to come across a huge number of wonderful fakes and some real bargains. Some noticeable items we spotted were an iPhone 4 for 5000 RMB which we played with for about half an hour and found to be an absolute delight, an 80’s ‘brick’ phone for 30,000 RMB!! More than the cheapest car on the Chinese market! Plenty of funny Motorola clones, which we’ll share tomorrow and this Blackberly!

No, that was not a typo. this Shanzhai phone is branded the Blackberly, its hefty in weight, has a crappy keyboard but fetures one one of the best interfaces we’ve used! And that’s saying something for someone who has lived with nothing but touch screens for the past year or so!

The Blackberly has a touch sensitive pad, very much like a small track-pad (possibly like modern Blackberries that I’ve have yet to play with as they are unavailable here) and it words extremely well, no, really really well!!

The O.S is a fake Blackberry system that is difficult for a Berry newb like myself to distinguish from the genuine system. In all it worked so surprisingly well that I found myself reach for my wallet after being told that this WIFI and GPS beauty with a very nice feeling rubbery backside would only set me back 600 RMB, that was until, however I tried out the keypad!!

As a select few may know I often try out a new gadget by typing in a sentence I’m rather used to typing. The sentence which cannot be repeated here, is not one written out of malice, but rather instinct (perhaps that’s worse!?) regardless I was unable to type  “???? is a co??” with out getting errors, incorrect letters, or just plain nothing. A huge shame as that track pad is awesome!!

Overall worth it if you’re a caller rather than a texter if not avoid!!

Next Slice Your Sim With the Micro Sim Adapter