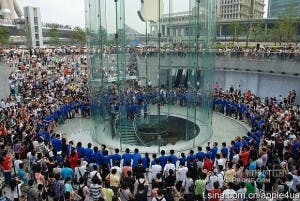 Just 13 days after launching the iPhone 4 in China, Apple have ceased all sales of the popular device at it’s Apple Retail Stores in both Shanghai and Beijing in an attempt to stop scalpers getting hold of the phones and selling them at a profit.

Although Apple have refused to release sales figures for the iPhone 4 one store has claimed to have sold more than 1000 units in just 3 hours with experts expecting total sales to be close to the 100,000 mark for the first 4 days of official sale. A large number of those sold were then sold on by scalpers with up to a 600 yuan mark up.

Customers wanting to get hold of an iPhone 4 will have to preorder a unit and collect it at a later date, they will also be limited to 1 phone per customer to help prevent punters making a fast profit.